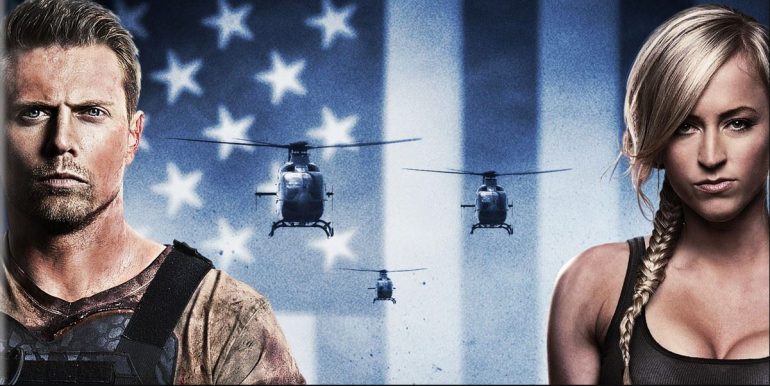 The Marine 4: Moving Target has some excellent action scenes and fun villains; it’s a shame Olivia Tanis had to be such an unsympathetic character where you don’t care what happens to her.

Review: The Marine movies are sort of a guilty pleasure; you know they won’t win any awards for originality but they sure are a helluva lot of fun.

The Marine 4: Moving Target is directed by William Kaufman (Sinners & Saints) so you automatically know that the action will be well done. There are shoot outs, hand to hand fights and a rather epic car chase… but most importantly of all? This movie is rated R; so we’ve got some decent violence and an almost First Blood vibe from the action.

This is especially apparent during the last half hour when our hero Jake Carter (Mike ‘The Miz’ Mizanin) turns the tables on his pursuers and booby traps the woods.

I’m not entirely convinced about The Miz as an action star; he looks the part but he seems to lack the charm of Dwayne Johnson and surprisingly doesn’t display much in the way of personality.

He handles the action well though and the fight scenes look authentic enough too.

I really didn’t like the character of Olivia Tanis (Melissa Roxburgh) who was just too much of a bitch to be sympathetic; I was pretty much siding with the bad guys to take her out and Jake was more patient with her than I would ever be. By the end she has become mildly more likeable but not much…

Matthew MacCaull and Josh Blacker were fun villains and weren’t over the top; in fact, the acting in general was decent from all the cast.

Despite being a direct to DVD movie it never looks cheap and the action scenes are more coherent than a lot of big budget blockbusters. It also moves along at a fast pace and doesn’t let up until the end credits.

The story isn’t anything new but we’re not looking for anything deep, just an excuse for smashy smashy and The Marine 4 delivers the goods there.

Overall, The Marine 4: Moving Target has some excellent action scenes and fun villains; it’s a shame Olivia Tanis had to be such an unsympathetic character where you don’t care what happens to her.