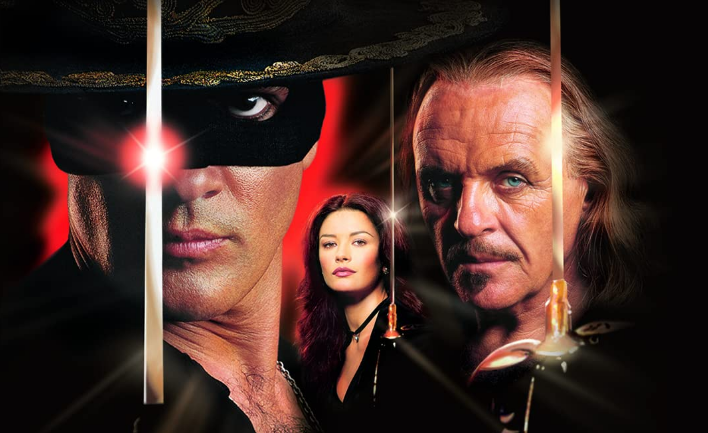 We haven’t covered the Antonio Banderas starring Zorro movies before so today I thought I would take a look back at them and see which is the superior entry.

Plot: After being imprisoned for 20 years, Zorro — Don Diego de la Vega (Anthony Hopkins) — receives word that his old enemy, Don Rafael Montero (Stuart Wilson), has returned. Don Diego escapes and returns to his old headquarters, where he trains aimless drunk Alejandro Murrieta (Antonio Banderas) to be his successor. Meanwhile, Montero — who has secretly raised Diego’s daughter, Elena (Catherine Zeta-Jones), as his own — hatches a plot to rob California of its gold.

Martin Campbell is one of the best action directors in the business having successfully rebooted 007 twice with Goldeneye and Casino Royale he also reinvigorated the character of Zorro for a modern audience with what I consider a classic in The Mask of Zorro.

Anthony Hopkins stars as Don Diego de la Vega/Zorro who is growing a little old for the swashbuckling heroics. He is ready to settle down with his wife and daughter but his nemesis Don Rafael Montero (Stuart Wilson) discovers his real identify and comes to arrest him; during the struggle Diego de la Vega’s wife is killed and he is taken prisoner while Montero takes Diego’s daughter Elena and raises her as his own. Diego de la Vega remains imprisoned for 20 years but escapes and finds thief Alejandro Murrieta (Antonio Banderas) who witnessed his brother being murdered at the hands of Captain Love (Matt Letscher). He wants vengeance so Diego takes Alejandro under his wing and teaches him how to fight and become the next Zorro.

The first time I saw this movie was on a plane; I was going on vacation somewhere (I can’t remember where) but the movie hadn’t been released in the UK yet so I got to see it a little early. Watching it on a tiny screen on an aircraft hardly did the movie justice but I loved it even then.

Antonio Banderas was born to play Zorro and he brings a roguish charm and cheeky sense of humour to the role making him an immediately appealing character. You understand his hatred towards Captain Love (who I always called Evil Jeff Daniels as that’s what he looks like) and you know when the two men eventually face off it’s going to be an epic battle.

Anthony Hopkins never disappoints either and Diego is a true hero who is dedicated to the people; when he loses everything he vows revenge and becomes a father figure to Alejandro helping him to become the man he was born to be.

There is no one more stunning than Catherine Zeta-Jones in this movie; she is smart, feisty and knows how to use a sword, taking after her father. She has real chemistry with Banderas on screen and their flirtations are never less than entertaining especially their swordfight where they end up cutting each other’s clothes to shreds.

Stuart Wilson is an underappreciated talent and makes for an effective villain; Montero is undoubtedly evil but is not without compassion and is genuinely upset when Diego’s wife Esperanza de la Vega is killed as he had always loved her.

The movie is rather long at 2 hours and 17 minutes but I wouldn’t cut a single scene as every moment establishes characters but also provides some jaw dropping stunt work and action set-pieces. The finale at the mine climaxes with one of the best explosions in cinema history and the acrobatics Zorro does still impresses especially the scene where he is jumping from horse to horse.

There are undoubtedly similarities between Batman and Zorro as neither of them have superpowers but fight for the greater good. They also both have caves/lairs under their mansions. I would still love to see a Batman movie where he actually moves like Zorro doing backflips and other cool shit but he always seems restricted by his suit.

The late James Horner provides one of his best scores which is filled with soaring heroic orchestra that also sounds suitably Hispanic. As always it has that same motif that is on the majority of his music scores.

Overall, the Mask of Zorro is one of Antonio Banderas’ best movies and Zorro is a role he was born to play; it’s got a witty script, heartfelt moments, Catherine Zeta-Jones looking amazing and spectacular action scenes to keep even the most jaded viewer entertained.

Plot: A secret society, the Knights of Aragon, seeks to keep the United States from achieving manifest destiny — and only the legendary Zorro (Antonio Banderas) can stop them. Unfortunately, Zorro, also known as Don Alejandro de la Vega, has problems of his own: His wife, Elena (Catherine Zeta-Jones), is divorcing him for spending too much time pursuing heroics and not enough being a father to their young son. But it isn’t long before the whole family gets caught up in stopping the Knights.

I’d only ever watched The Legend of Zorro once and had no real desire to return to it as I didn’t like it the first time. I rewatched it yesterday as it’s on Netflix just now and although I still don’t think it’s a great movie there is still plenty to enjoy.

James Horner returns to once again give us a swashbuckling and heroic sounding music score, there are a few enjoyable set-pieces and Catherine Zeta-Jones is as gorgeous as ever. I also think Rufus Sewell makes for an entertaining villain but it’s Nick Chinlund who steals it as the wooden toothed henchman Jacob McGivens. I prefer Stuart Wilson’s Montero however, as there was more of  an emotional engagement with his character. The conflict was more personal in the first movie with Diego wanting his revenge but I admire that they did something different and avoided retreading the same story.

You can never go wrong with a climax on a fast moving train that once again ends with an epic explosion (that could be misconstrued as rude) so both movies have action-packed finales. There are once again some wonderfully choreographed sword fights and Martin Campbell really knows how to execute an action sequence.

Where this one falls down is the story; I hated the idea of Alejandro and Elena splitting up with her going undercover to spy on Armand (Sewell). It just felt dumb and it never grabbed me. The first movie had a sharper script too; there are a couple of fun moments but the bickering between Alejandro and Elena gets annoying very fast. The kid Joaquin de la Vega isn’t as irritating as he could be and surprisingly becomes rather lovable as he is clearly preparing to become the next Zorro when he is old enough. I like the idea that he thinks is father is weak as he tends to avoid conflict but as we all know Alejandro is trying to keep his family safe from his other life as Zorro. When he discovers the truth about his father’s identity his face is full of pride.

I missed Anthony Hopkins in this as I loved seeing him and Banderas together in the training scenes because they made for an entertaining duo.

Overall, The Legend of Zero doesn’t quite capture the same magic as the first movie but it’s not without its moments and watching Antonio Banderas as Zorro never fails to entertain.

For me this decision is easy – The Mask of Zorro is superior in every way with a better story, action, villains and script; I find Legend drags on for too long even though it’s around the same length as the first movie. It’s not terrible by any means but it’s not a film I watch often so The Mask of Zorro all the way. Do you have a favourite?