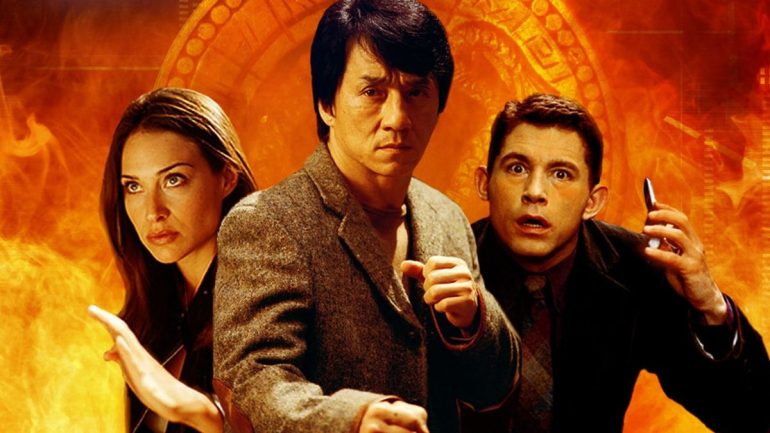 The Medallion is an enjoyable adventure tale with Jackie Chan at his amiable best and some impressive stunts; it’s too bad about the wirework at some points. It’s nice to see a young Scott Adkins fight Chan which is a highlight. The movie itself is silly and not especially memorable but it has its moments and younger viewers will find plenty to entertain.

Plot: Eddie (Jackie Chan) is an indomitable Hong Kong cop who, after a near fatal accident involving a mysterious medallion, is suddenly transformed into a Highbinder — an immortal warrior with inhuman powers. Eddie enlists the help of fellow agent Nicole (Claire Forlani) to determine the secret of the medallion and face down the evil Highbinders who so desperately want it back

Review: I feel like we haven’t covered enough Jackie Chan films on this site so I’m catching up on them now and will be reviewing a bunch over the coming weeks.

First up is The Medallion which stars Jackie Chan, Claire Forlani, Julian Sands, Anthony Wong and Lee Evans; it’s a lighthearted and silly romp which still manages to entertain.

The Medallion is not one of Jackie’s best films but it still has some impressive stunt work and we get to see a young Scott Adkins face off against Chan which is certainly one of the highlights.

Lee Evans will likely appeal to younger audiences and admittedly I did laugh a few times at his antics but he won’t be for everyone.

Claire Forlani always looks like she’s trying not to laugh and as we see in the outtakes that’s because it’s true; as always the outtakes over the end credits are the best part of the film.

Jackie Chan never fails to impress with his stunts and there are some fantastic moments here and at one point during a chase Chan barely misses being hit by a car; in the end credits we even see that in one take he actually does get hit.

At 88 minutes it moves at a fast pace and rarely slows down with near constant action and stunts. The biggest letdown of the movie is the amount of wirework especially in the finale which does take you out of if but the fact it’s a fantasy tale then it’s not a massive deal.

Julian Sands would have made for a great Bond villain with his quiet menace and he makes for a fun if rather forgettable villain in this.

According to IMDb “After seeing credited director Gordon Chan’s rough cut, Columbia Pictures hired Douglas Aarniokoski to shoot new sequences, and re-edited the film extensively. One of the reasons for extensive re shoots was Columbia Tristar’s discovery that the shooting script for the movie borrowed large sections including entire scenes and dialogue from Mark Goldblatt’s horror comedy Dead Heat from 1988”. The Medallion is a similar concept although Dead Heat is the better film for me.

Overall, The Medallion is hardly a classic and some might say it’s awful but I do have a soft spot for it due to Chan’s sheer likeability on screen; the sense of fun is contagious so if you watch with an open mind you’ll find something to enjoy.