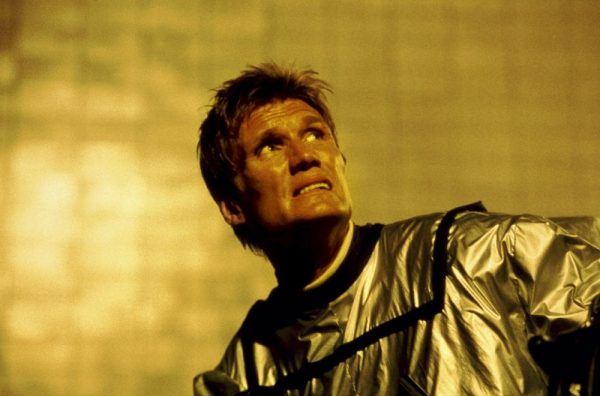 The Minion AKA Fallen Knight (1998) Review

I can’t even recommend The Minion to die hard Dolph Lundgren fans. It’s boring pace and lack of action make it a chore to get through so go watch End of Days again instead.

Plot: A holy man (Dolph Lundgren) and an archaeologist (Francoise Robertson) seek a key that will stop a demon from releasing the Antichrist.

Review: I like to think I have pretty low standards when it comes to the types of films I enjoy but even my bar wasn’t low enough to enjoy this rather dull “action” movie starring Dolph Lundgren. I’ll watch Dolph in anything and I like how he isn’t afraid to try different kinds of movies and genres however, The Minion (or Fallen Knight as it’s also called) is nothing but a low rent rip off of End of Days; lacking the budget, script and cast to make it remotely memorable. Dolph does the best with what he is given but even he can’t polish this turd of a movie.

Françoise Robertson plays archaeologist Karen Goodleaf who doesn’t seem to know how to dress for work as she wears a really inappropriate red leather jacket which seems an odd fashion choice for someone working in underground tombs most of the time but this is movie logic and is frankly the least of the film’s problems. Her character is also quite annoying for the first half of the movie and she keeps getting in Dolph’s way as he tries to keep the key as far from the Minion as possible.

The main problem is the story is just not that interesting with each scene plodding to the next with little to no action. It picks up in the final 20 minutes but it’s all pretty lazy and I found myself reaching for my phone and looking at Retriever puppies on Instagram… which were far more interesting than this.

The archaeology is also mostly bollocks proving that very little research was done on the subject but I guess the filmmakers considered genre fans would just be interested in people being punched in the face… but even that doesn’t happen nearly enough.

There were a few moments where the score was cool with some electric guitar riffs but then it just becomes a distracting noise by the end.

The fact that the plot is identical to End of Days had me pining for the underrated Arnie movie instead. At least it had some action and a bigger budget with a choice villain in Gabriel Byrne; The Minion also steals from the Denzel Washington movie Fallen but once again isn’t as good.

Overall, I can’t even recommend this to die hard Dolph Lundgren fans. It’s boring pace and lack of action make it a chore to get through so go watch End of Days again instead. Also, fans of Despicable Me will be disappointed as there are no Minions in this movie.