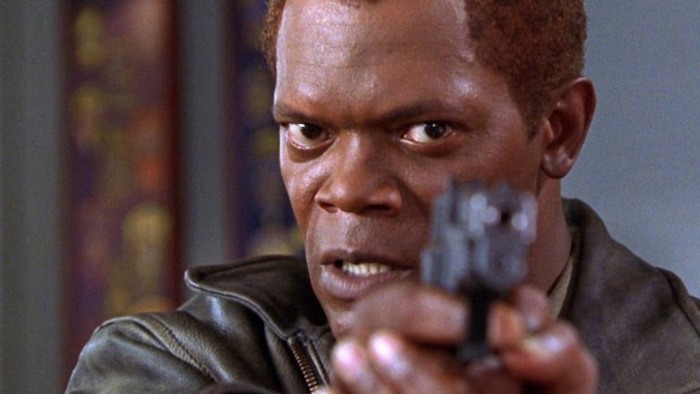 The Negotiator is a tense action thriller with great performances and and excellent cast. Jackson and Spacey sparkle on screen and are at the top of their game.

Plot: In a desperate attempt to prove his innocence, a skilled police negotiator accused of corruption and murder takes hostages in a government office to gain the time he needs to find the truth.

Review: This is one of the best roles Samuel L. Jackson has ever had, but the entire cast is just fantastic. You’ve got Kevin Spacey, JT Walsh, David Morse and an early role from Paul Giamatti too. The film is incredibly tense and unpredictable with Jackson on career best form as a man pushed too far in a desperate situation.

The whole dynamic between Jackson and Spacey is well developed from the very start. Spacey is unsure who to trust and doesn’t know why Jackson has asked for him specifically. It’s one of the few roles where Spacey is actually a bit of an action hero and badass. He’s the most likable character in it, but he’s so well developed.

I love how he is one of the best hostage negotiators in the business, but at home he can’t negotiate anything with his own family. It’s a great piece of writing and the performances elevate it.

The music score by Graeme Revell is excellent, eespecially the opening credits theme which is just plain cool. Revell is a great composer and has provided the music to many a classic actioner, including Hard Target.

The script and story are top notch with some choice lines, but never anything cheesy so it’s just an exercise in pure class.

The only thing that I would say is that it’s not the kind of film I can watch many times; once you know how it ends, it does lose some of the tension.

There is some great action, but not overly huge set-pieces; it’s more small scale with SWAT team guys using guns. This totally works for me as I’ve said before, small(ish) scale action I am a big fan of.

Overall, The Negotiator is a tense action thriller with great performances and and excellent cast. Jackson and Spacey sparkle on screen and are at the top of their game.