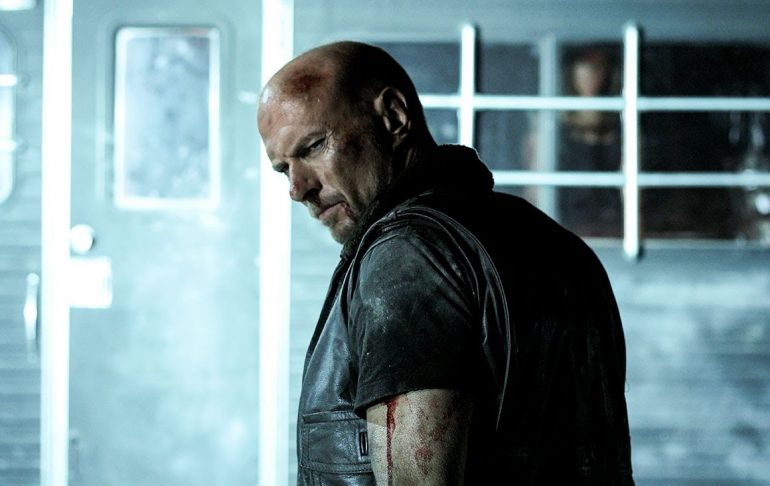 The Night Crew is refreshingly different with memorable characters, plenty of violence and an unpredictable story.

Plot: A group of hard up bounty hunters must survive the night in a desert motel against a horde of savage border runners when they realize their fugitive, a mysterious Chinese woman, is much more than she lets on.

Review: We’ve been talking about The Night Crew for a few years now and for a while there I was wondering if we’d ever get to see it. Well, I finally got to sit down to watch it last night and it’s just my kind of film. First of all, the opening scene is in a strip-club which is an immediate attention grabber as this is something that’s missing in far too many modern action movies.

Although working on a limited budget director Christian Sesma makes the most of his cast and the action is visceral and bloody. The violence isn’t glamorised but feels very real… and thoroughly satisfying.

There are fights, shoot-outs, explosions and more to keep genre fans entertained from beginning to end but the one thing I think deserves praise is that The Night Crew feels unique. It isn’t a remake, reboot or comic book adaptation (that I know of) so the story is unpredictable and there are a few twists and turns that keep you engaged with all of the characters.

Luke Goss plays Wade who is just at his coolest in this movie; he is a complete badass but the safety of his crew is paramount and he’ll do whatever he can to make sure everyone gets home alive.

The rest of the crew are Crenshaw (Bokeem Woodbine), Ronnie (Paul Sloan) and Rose (Luciana Faulhaber); they’re a tight unit but as the story progresses and secrets are revealed the situation goes from bad to worse.

Paul Sloan is certainly a potential new action star as he had real screen presence; we also get a small role from Jason Mewes who adds a little humour but not too much.

Danny Trejo is on villain duties and although he doesn’t have any action scenes, he manages to still be pretty scary as cartel boss Aguilar; he’s determined to have Mae (Chasty Ballesteros) returned to him no matter what.

Speaking of Chasty Ballesteros, she is absolutely stunning and nearly steals the movie as Mae; she’s mysterious and deadly, making her a joy to watch on screen.

The music score really stood out as it created this ominous and creepy atmosphere but kicks in when the action starts too.

The finale was an interesting choice and when you find out who Mae really is it may not please everyone but I knew about it in advance so it didn’t come as a surprise. It’s open for a potential follow-up and I’d be 100% down to see what happens next.

Overall, The Night Crew is refreshingly different with memorable characters, plenty of violence and an unpredictable story; definitely worth checking out if you’re tired of CG filled blockbusters.