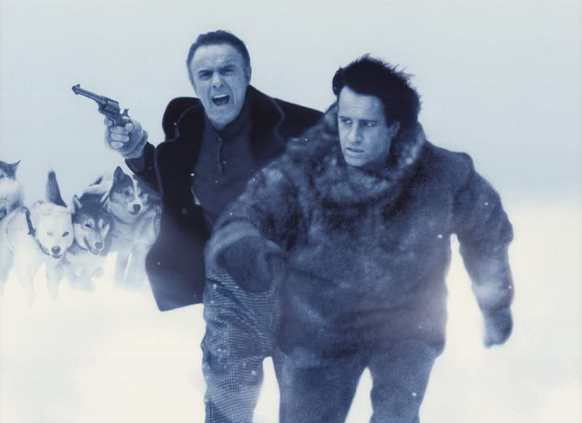 The North Star is an action-packed Western with James Caan at his crazed best and Christopher Lambert as engaging as ever making this well worth your time.

Plot: A tough tale of the battle for gold-rich land between a crooked businessman and a Native American chief to whom the land is sacred. To get the rightful owners out of his way, the entrepreneur contemplates kidnapping and even murder. However, the chief’s survival skills look set to scupper the businessman’s nefarious plans.

Review: I love when you discover a movie you haven’t heard of before and I had never seen The North Star starring Christopher Lambert and James Caan until it popped up on Amazon Prime. It would make for an awesome double bill with Death Hunt starring Charles Bronson as it’s a similar tale about a man being chased across the snowy mountains by a group of bad guys.

Few can match James Caan as a villain as his wild eyes give off a rage that is simmering under the surface; in The North Star he plays Sean McLennon, a crooked and greedy businessman who is taking over as much land as possible and permanently removing anyone that gets in his way. He crosses swords with Hudson Saanteek (Lambert) who is trying to protect sacred Indian caves which McLennon has his eye on.

It’s funny how immediately when Caan comes on screen we never take to McLennon; he’s just a nasty bastard who is arrogant and cruel right from the start. When Saanteek kidnaps his woman Sara (Catherine McCormack) after “negotiations” go sour McLennon gets a posse together and they start to hunt Saanteek down.

At less than 90 minutes The North Star wastes no time in getting going and keeps the pace tight for the entire runtime.

It has a fantastic supporting cast that includes Burt Young as one of McLennon’s henchmen Reno who is also as evil as they come.

There are regular shoot-outs and Lambert doesn’t need to say much to be an appealing lead. It doesn’t take long for he and Sara to bond when she finds out who the real villain is which brings them together.

Watching McLennon get crazier as it goes along will keep you glued as he starts to even kill his own men making him truly despicable, if almost cartoonish at times.

Overall, The North Star was a pleasant surprise with solid performances and a relentless pace to keep things moving. If like me you had never seen it before it’s well worth checking out.