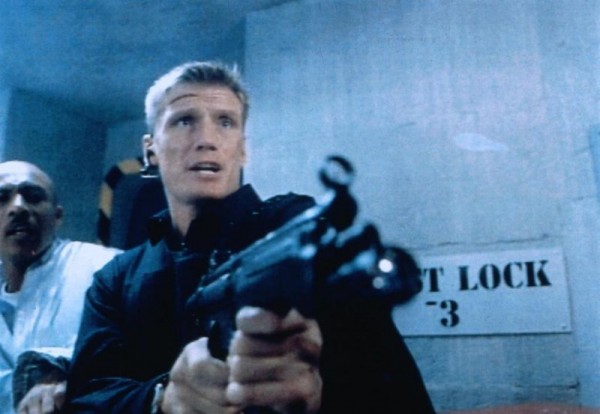 The Peacekeper has one of my favourite Dolph characters with Major Frank Cross and it has some fun one-liners too. Although some of the dialogue is a little clunky and the music sounds cheap, I still had a good time.

Plot: When a terrorist group steals the US President’s personal communications computer for launching the US arsenal in case of war, only a heroic Major has the key to prevent a Presidential assassination or a nuclear holocaust.

Review: This is essentially Dolph does Die Hard and once again it’s a whole lotta fun. Dolph plays Major Frank Cross and it’s one of my favourite characters of his as he’s a bit of a one-liner spewing McClane type, which is the best kind of action hero.

Sure, some of it is pretty cheesy but it moves along at a great pace and it also has the bonus of Roy Scheider as the President. Not entirely sure what kind of accent he’s trying to do but it’s a little odd. He was always great to watch on-screen though and this isn’t the first time he’s played the POTUS (See: EXECUTIVE TARGET).

It gets extremely tense towards the end and it’s one of the few movies where a nuclear bomb is actually detonated which was really ballsy. Fans of Mount Rushmore may want to skip it…

The villain Lt. Colonel Douglas Murphy is played by Michael Sarrazin and he makes him quite sympathetic as he’s a soldier who has been wronged by his own government. I always like having that kind of back-story as it makes the bad guy a bit more human. It’s a shame he doesn’t have a big fight at the end though and it’s a bit of an anti-climax.

The music was pretty forgettable and rather cheap sounding in places, so nothing too memorable there.

It has some decent action but the highlight is definitely the rooftop car chase which is pretty spectacular and exciting. You’ve also got Dolph having a few fist fights with some goons, which is always worth a watch.

Overall, The Peacekeper has one of my favourite Dolph characters with Major Frank Cross and it has some fun one-liners too. Although some of the dialogue is a little clunky and the music sounds cheap, I still had a good time.