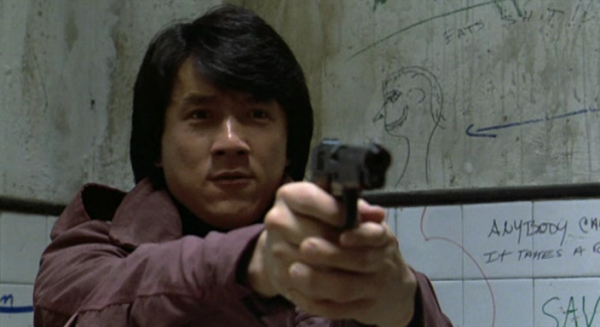 The Protector is one of my favourite Jackie Chan movies with some breathtaking action and stunt work making it a must-see.

Plot: Two New York cops, Billy Wong and Danny Garoni, head to Hong Kong after the daughter of a rich businessman is kidnapped by the drug lord, Mr. Ko.

Review: If there’s one director I miss from modern action moves it’s James Glickenhaus; with movie movies like The Exterminator, The Soldier, McBain and Shakedown to his credit he was a director who knew how to film an action scene.

The Protector is no different and is one of Jackie Chan’s best movies; it starts off with a spectacular speedboat chase through the Hudson river climaxing with Chan jumping off the boat and on to a helicopter as the boats crashes. My jaw hit the floor as there was genuine stuntwork there with Chan at his finest.

The action throughout was first rate with shoot-outs, martial arts and more.

I also liked the more serious tone of The Protector; where Chan’s movies are usually pretty light hearted, this is quite humourless and all the better for it.

Chan teams up with Danny Aiello as they travel to Hong Kong to take down the villainous Mr. Ko (Roy Chiao) and the movie has practically every 80’s action movie cliché in the book: shouty police captain? Check. Showdown at the docks? Check. Gratuitous nudity? Check. Blood squibs and violence? Check.

That’s why I love it so much and can watch it over and over again.

The final 20 minutes has Chan doing what he does best; beating the shit out of multiple bad guys at once but the best fight is between Chan and Bill Wallace which is pretty brutal and thoroughly satisfying.

Sure, it’s quite dated (especially the score) but the action still stands up today and is better than the majority of blockbusters over the past few years.

Overall, The Protector is one of my favourite Jackie Chan movies with some breathtaking action and stunt work making it a must-see.