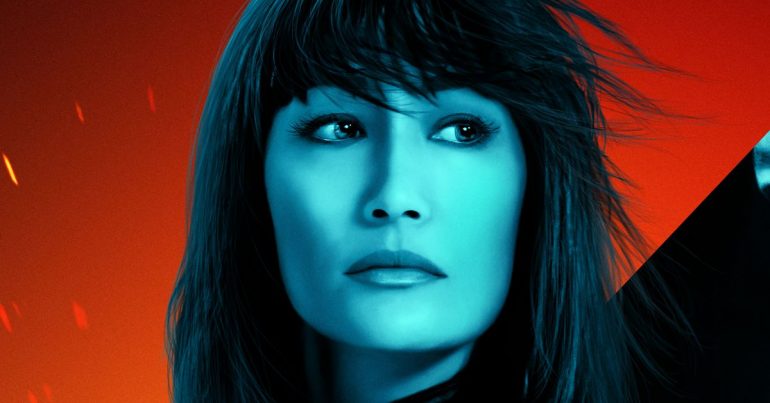 The Protégé is a slick and sophisticated action thriller with a winning cast who are clearly enjoying the rapid-fire script; Michael Keaton is on top form and the action is effectively vicious making this worth checking out.

Plot: Rescued as a child by the legendary assassin Moody, Anna is the world’s most skilled contract killer. However, when Moody is brutally killed, she vows revenge for the man who taught her everything she knows. As Anna becomes entangled with an enigmatic killer, their confrontation turns deadly, and the loose ends of a life spent killing weave themselves ever tighter.

Review: A new feature from director Martin Campbell is a bit of an event for me as he has managed to successfully reboot the Bond franchise twice with Goldeneye and Casino Royale, gave us one of Jackie Chan’s best action movies in recent years with The Foreigner, directed the underrated No Escape and also cast Antonio Banderas as Zorro. There was also Ryan Reynolds’ Green Lantern film but let’s not bother discussing that.

Campbell is back in the director’s chair for the new action thriller The Protégé starring Maggie Q, Sam Jackson, Robert Patrick and Michael Keaton and he doesn’t disappoint. The cast alone is enough to generate curiosity; as expected every scene with Michael Keaton is a highlight and he has some wonderful chemistry with Maggie Q with some razor-sharp dialogue. He has this amazing knack for being charismatic and charming one second and then menacing the next which is what really makes him steal the show.

Although I prefer The Foreigner (as it has more action) The Protégé is slick and sophisticated with several twists throughout to keep you guessing. The action is brutal and there are some shocking moments of sudden violence; the fight scenes are well choreographed and surprisingly visceral too.

It does get off to a bit of a slow start but it lets us get to know the characters and their relationships which I enjoyed especially any scene with Keaton who excels in this movie where you question if he is good or bad. I thought Ray Fearon was incredibly threatening as Duquet, one of the main antagonists of the film who isn’t charming like Keaton and is more of a blunt instrument.

Maggie Q is totally badass as Anna but that comes as no surprise after her turns in Nikita, Live Free or Die Hard and other action pictures. Despite Anna’s profession as an assassin she is still sympathetic and isn’t invincible either getting regularly hit, shot and tortured but she’s still strong enough to come out the other side of it. Sam Jackson is the father figure who has raised Anna and made her everything she is today; he has a few typical Jackson moments which provide some of the humour but their relationship gives the story added heart.

There is something about this movie though that doesn’t really stand out; it’s perfectly enjoyable but the assassin genre is getting a little over saturated these days and I’m not sure many people will still be talking about it in a few months but we’ll see…

The music made little impact and I can’t remember anything about it; it worked for the movie but I couldn’t even tell you what it sounded like.

Overall, The Protégé may take a little while to get going but it’s worth the wait with some brutal R rated action and a cast at their best especially Michael Keaton who steals every scene. It’s not a classic action picture but there’s plenty to enjoy with some slick dialogue and several twists to keep you guessing.