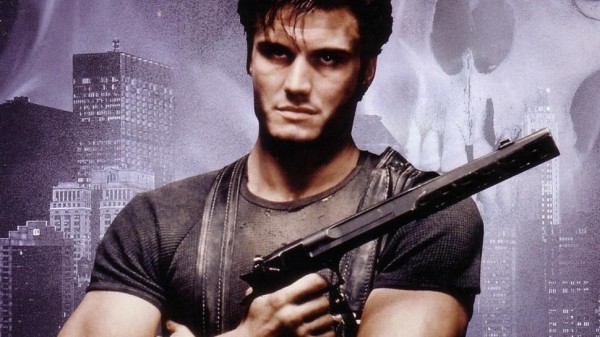 Umbrella Entertainment have blessed us with the definitive Blu-ray of The Punisher with 3 different version of the film incorporating deleted scenes and violence we hadn’t seen before. The Blu-ray is region free as well so you can get it no mater where in the world you are.

Plot: Australian All region Blu-ray edition. Inspired by the infamous Marvel Comic Book anti-hero, The Punisher is a dark and brooding action packed trip into the violent underworld of crime. When respected police officer Frank Castle (action superstar Dolph Lundgren) suddenly loses his family to a vicious mob attack he withdraws from public life and becomes a man filled with hate. Driven into the shadows, fueled by vengeance, he takes to the city’s underground armed to the hilt with an arsenal of deadly weapons to track down and punish those who killed his family. With the Japanese Yakuza in the mix and a vicious battle against child slave traders, The Punisher sets out to clean up the streets the only way he knows how. Also featuring Oscar winner Louis Gossett Jr. (An Officer and a Gentleman), Jeroen Krabb (The Fugitive) and directed by Mark Goldblatt (Oscar nominated editor of The Terminator and T2: Judgement Day), The Punisher is a full-on assault – an explosive spectacle of 1980s action adventure.

Review: I must give a shout-out to my friend John Jerva over at Action Flix for recently sending me the Umbrella Blu-ray of Dolph Lundgren’s The Punisher.

I’ve already revisited the film a while back so I’m not going to go into the original film that much but I want to talk about what’s on this particular disc:

(4). ‘VIOLENCE DOWN UNDER’: NEW INTERVIEW WITH MARK GOLDBLATT

(5). ‘VENGEANCE IS HIS’: NEW INTERVIEW WITH DOLPH LUNDGREN 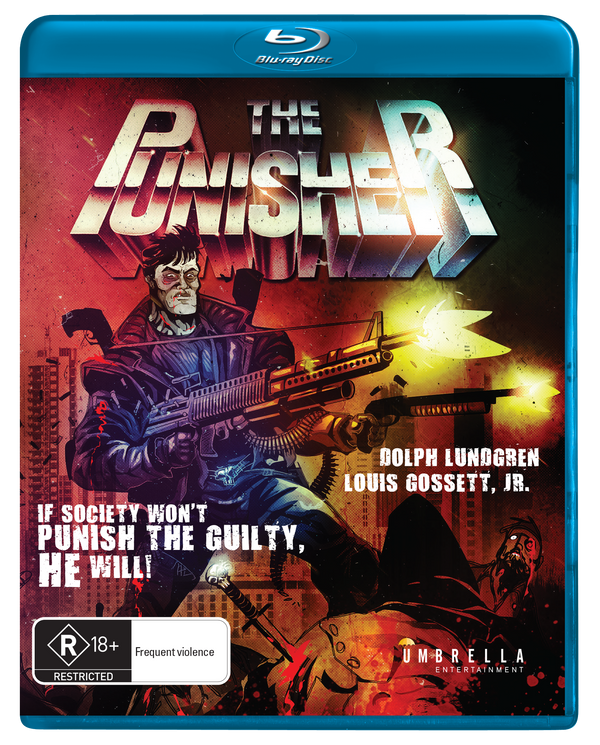 3 versions of the film! That alone would be reason enough to buy this so let’s take a look and see if it’s worth buying.

The workprint version of The Punisher features the deleted scenes from the theatrical release including the opening 10 minutes which were cut (for some reason). This gives us backstory into Frank, and his relationship with his partner Jake (Lou Gossett Jr.) as well as giving us some scenes with Castle’s wife and kids. It just gives the film a little extra depth so we see how he transforms from a good cop and family man into the deadly vigilante.

This being a Workprint then obviously the quality isn’t spectacular but it’s good enough and it’s going to be hard to watch the theatrical cut again after seeing this. Some of the kills are more graphic here too and the bodycount is massive.

Dolph’s Punisher delivered what I wanted to see from a Punisher movie; yeah, we don’t see the skull on the shirt but it’s on his knives; in one of the special features where director Mark Goldblatt talks about it he said it was a mistake not having the skull but they wanted to avoid it looking too comic book-y which I get. He also mentions how Castle shouldn’t be likeable; he is a killer and I think Dolph captures that but still somehow manages to make him somewhat sympathetic especially seeing the scenes with his family at the beginning.

We get a 5-minute interview with Dolph Lundgren who talks about how he had fun with the movie but was a little disappointed that so much got cut from it. He even mentions how he did a stunt where he jumps onto a circus tent and he was annoyed it was totally removed as he hurt is back filming it.

There is also the Unrated Cut which has more violence but once again after watching the Workprint how do we go back?

It’s funny watching the workprint as the film wasn’t complete so we hear the music scores to other action movies of the time including Rambo, Aliens and Lethal Weapon.

Although it’s mentioned in the theatrical edition, I like the scene between Frank and Jake in the car where they talk about Jake celebrating an anniversary being sober once again just giving us some extra character moments.

I already had The Punisher on DVD but I won’t be watching any other edition now as I think Umbrella really have knocked it out of the park giving us the movie as it should have been with this excellent Blu-ray.

Overall, The Punisher is still one of my favourite Dolph Lundgren movies with buckets of blood (and squibs galore), a bodycount in the hundreds surely and wall-to-wall action from beginning to end. If like me you are a fan of this film then you need this Umbrella Edition in your life as the Blu-ray is region free.