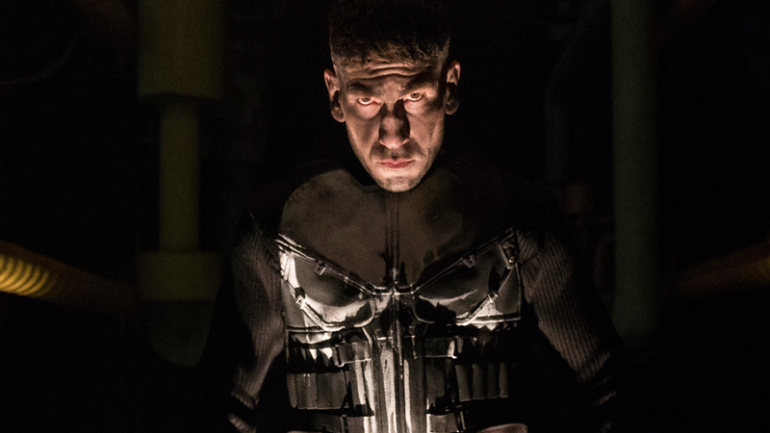 It’s a bit of a slog to get through and unnecessarily talky but once the action kicks in The Punisher delivers what we signed up for.

Plot: After the murder of his family, Marine veteran Frank Castle became a vigilante known as “The Punisher” with only one goal in mind, to avenge them.

Review: Critics for Marvel’s The Punisher TV series have been rather mixed and I can understand why. When your protagonist is known as The Punisher you kinda want to see him y’know, punish people which I think is pretty reasonable. That doesn’t happen nearly enough in this first season as Frank Castle spends most of the show either hiding, talking or getting shot/stabbed. What we want to see is him putting bad guy’s heads in vices and squeezing the life out of them and other methods of extreme interrogation. It’s not really until the final 3 episodes when things start to really kick into gear and Frank earns the name Punisher, but at times it is a slog to get there.

I think Jon Bernthal is the best live action interpretation of the character to date; he’s an unstoppable force of nature whose brooding intensity jumps off the screen. He is constantly filled with rage and you are waiting for him to explode at any time. He is essentially driven mad with grief after the murder of his family and feels the need to take down everyone responsible. Not only is this a study of why Castle becomes The Punisher but the show also deals with soldiers coming home and trying to fit back into society, suffering from PTSD and how the public sees them; it also covers the sticky debate on gun control but I get the feeling Frank would be against such a thing…

Before any punishing happens however, we have to sit through far too many episodes with Frank and Micro (Ebon Moss-Bachrach) getting to know each other and putting their plan together to take down the people that have ruined their lives … very… slowly. I liked that we get to know the characters though and get to empathize with both of these outsiders’ predicaments but I couldn’t help but feel it was stretched out to make it last 13 episodes.

Despite it being far too talky and not stabby enough there are still a good few brutal action scenes and even the first episode has Frank take on some bad guys with a sledge hammer. There are a few shoot-outs featuring Castle grunting like an animal which just makes him even more fierce as he is clearly addicted to war and enjoys dishing out his brand of justice. I just wish we got to see more of it.

The Punisher should never be boring so somebody dropped the ball somewhere as this could have been incredibly intense like Frank was in the Daredevil episodes.

The story to this first season just wasn’t all that interesting and felt far too padded out. It would have worked better as a movie where they were forced to make it tighter and more exciting.

Like I said though, the last three episodes make it worthwhile and have some massively entertaining violence with Frank doing what he does best; it’s just a shame it takes so long to get there.

The cast are all excellent with Ben Barnes particularly standing out as Frank’s war buddy Billy. I didn’t recognize Mary Elizabeth Mastrantonio (Robin Hood: Prince of thieves/The Abyss) as Marion James at first so it was nice to see her in a decent sized role again.

Overall, The Punisher is a little disappointing and slowly paced but I loved the last three episodes and Bernthal is just a powerhouse as Frank Castle. It has established the characters nicely and I look forward to a new season or movie hopefully sooner rather than later. What exactly is a powerhouse though?