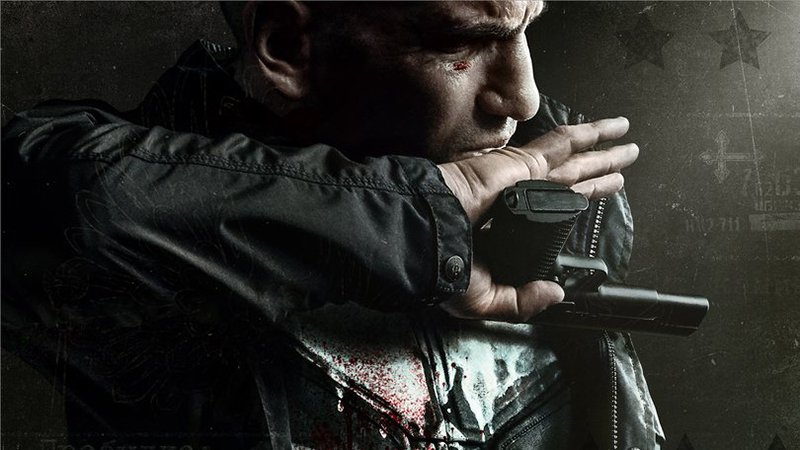 The Punisher: Season 2 would have been perfect if it had the 8 episode formula like The Defenders as it would have tightened up the pacing which really drags after the epic third episode but there’s enough bloodshed to be worth a watch. I would rather see The Punisher in movies again instead though.

Plot: The Second season of The Punisher revolves around Frank Castle saving a girl from being murdered, forcing him to decide if he should embrace his life as the Punisher.

Review: I go into some minor spoilers in this review so if you haven’t watched Season 2 yet best hold off reading.

I’ve heard several people raving about the second season of The Punisher and after the first three episodes I could understand why. The first half of episode 1 has Frank a free man who is the happiest we’ve seen him so far. He stops by a bar and even meets a woman and all seems to be going so well… this is Frank Castle however, and he is the world’s biggest shit magnet.

It isn’t long before this new happy world comes crashing down and a mysterious girl called Amy (Giorgia Whigham) shows up at the bar. Frank can immediately sense something is off about her and his instincts are proven correct when a group of killers comes after her; Frank being Frank can’t sit it out when a girl is in trouble so he gets involved and what ensues is one of the best action scenes of the series. He shoots, stabs and fights his way through them all and by the end of the episode his new lady has been shot and he and Amy are on the run.

Episode 2 has Amy and Frank holed up in a motel with more killers on the way but The Punisher is ready for them and we have some awesome action scenes as he takes them out in his own imitable fashion.

The best episode of the season for me was the third as it’s a nice nod to John Carpenter’s Assault on Precinct 13 with Amy and Frank picked up by cops after the motel shoot-out and thrown in small-town jail. The group of killers comes calling and a battle for survival ensues with the cops eventually unleashing Frank on the bad guys.

The killers are led by a man known as John Pilgrim (Josh Stewart) who is a man of God working for a higher power, in this case a rich couple who have essentially manipulated him into doing their bidding.

Stewart gives a restrained performance as Pilgrim and although he isn’t exactly a nice guy he isn’t a total monster by any means making him a more interesting character than you’d first expect.

It’s after episode 3 where Season 2 lost me a little as when Frank and Amy head to New York I found the pacing ground to a halt; episode 4-6 are incredibly dull and as with the majority of Netflix Marvel shows 13 episodes is too many; The Defenders got it right with 8 episodes keeping the pacing tighter but the 13 episodes drag out a rather uninteresting story that surprisingly lacks urgency and once again we have several episodes which involve people sitting around waiting for events to happen to propel the plot forward.

I was hoping they would learn from the first season which had similar flaws in pacing but this season manages to be less spectacular. At least the first season had the final 3 episodes which had Frank at his brutal best, if anything he comes across as too soft and frustratingly sane this time. The Punisher I think works better as a movie than a TV series as it should be constant wall to wall bloodshed rather than everyone being introspective questioning their lives.

This season has Ben Barnes return as Billy Russo who is now disfigured after his last confrontation with Frank; only thing is he looks like he cut himself shaving and isn’t anywhere as deformed looking as he should be. Personally, I loved the look of Jigsaw in Punisher: War Zone which was far more what he should be like. Billy has awakened from a coma with no recollection of who he is or what he did so basically everything he did in season 1 is pretty much invalid except that everyone else remembers just fine especially Madani (Amber Rose Revah) who has becomes obsessed with coming to visit him in hospital every day as she is convinced he is faking it.

I have never particularly liked Madani as a character and this season didn’t help; she really has no redeeming features and is rude to pretty much everyone she comes across.  I find that with the majority of female characters in this show and the only one who is truly sympathetic is the lovely Karen Page. I couldn’t even be bothered with the kid Amy who was mildly annoying too and kept making frustratingly stupid decisions so Frank would have to keep coming to save her.

Also, why does Frank only wear the Skull for like 1.5 episodes? It’s only in the final 15 seconds of the season where we see him with the long leather jacket and guns blazing with the skull showing. Why can’t we have that all the time (or at least a lot)?

Ben Barnes really is fantastic as Billy making him slightly pathetic one moment but then utterly insane the next and you forget that he’s actually English as his accent never slips once. He is never really known as Jigsaw though and it’s more implied but it’s almost like they’re embarrassed to do him properly. His relationship with his doctor Krista Dumont (Floriana Lima) is complex as she seems to enjoy how unhinged he is as she has her own issues but I was never particularly interested in it and just wanted to see Frank crush some heads.

Despite being overly long there are still plenty of entertaining action scenes with one of my favourites being Frank taking on a gym full of thugs and beating the shit out of them with weights and whatever else he can get his hands on. There is also an awesome shoot-out after a robbery with Billy unloading hundreds of rounds at Frank in the middle of the street which was a major highlight.

I also really like Jon Bernthal as Frank although as I said he is far less insane this time around but still vicious enough when the time calls for it; I love how he roars when he goes into kill mode just becoming a total beast… I just wish he did it a little more. I found the finale a little underwhelming and nowhere near as brutal as the first season which was a damn shame.

We likely won’t be getting a third season thanks to Netflix pulling the plug on all their Marvel shows (probably to move over to the new Disney streaming channel coming soon) but I hope we get Bernthal to come back in some Punisher movies as the characters have all been established and I just want to see him go full on Punisher Max (like the comics).

Overall, The Punisher: Season 2 still has the same pacing issues as the first season with too many episodes but there is enough blood spilled to keep action fans happy. Bernthal is a force to be reckoned with as Frank but I think we still haven’t quite seem him at his best in full Punisher regalia.