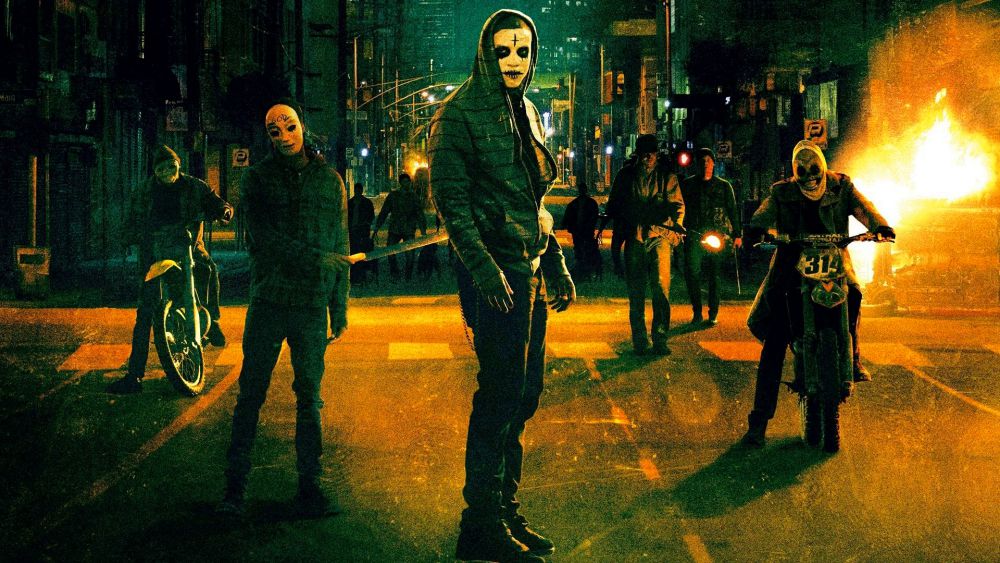 The Purge: Anarchy isn’t quite as crazy as it could have been but there is enough action and tension to make it a riveting thrill ride.

Plot: A young couple works to survive on the streets after their car breaks down right as the annual purge commences.

Review: The first Purge movie had an interesting concept but ended up being just another home invasion movie and essentially squandered what could have been an excellent story.

Thankfully, this sequel is superior to the original in practically every way; we actually get to see some purging on the streets and get a better idea of the chaos that would ensue.

It doesn’t quite go as far as it maybe could in terms of being shocking or disturbing, but it succeeds in being incredibly tense and has a fantastic protagonist in new badass-on-the-block Frank Grillo.

He essentially steals the movie as a man known only as Sergeant but he’s basically playing The Punisher; he is on the hunt for the man who killed his son but his plans go awry when he intervenes when two women are being attacked by purgers.

One thing leads to another and Sergeant ends up leading a ragtag group of people through the nightmarish city to safety. Some of the supporting characters are a bit annoying and I was really hoping they would get killed off but sadly they didn’t… dang.

In terms of action, there is plenty of it with one of the purgers having a giant mounted gun in the back of the truck and he just mows down anyone in his way.

I often wonder what this film would have been like if it had been filmed in the 70’s; I think with a Death Wish kind of vibe, it would have worked a lot better in creating a gritty, Hellish world.

These are only minor qualms in an otherwise solid action thriller which actually has something to say; it is of course the old “rich people are evil” theme but I am maybe looking too much into it with this next potential theme. What I get from it is that the purgers are basically the Second Amendment loving gun lobby who think it’s their “God given right to kill because the Government said so”.

It builds up to a rather action-packed finale where the poor people rise up and take revenge on the evil rich folk. It’s pretty satisfying to be honest and the film doesn’t skimp on bloodshed either.

The score was quite impressive too and although lacking a theme tune, it has some cool twanging guitars and helps in building up the tension.

Overall, The Purge: Anarchy isn’t quite as crazy as it could have been but there is enough action and tension to make it a riveting thrill ride. A star is born with Frank Grillo and despite this character being very similar to Frank Castle, I’d still love to see him as The Punisher. It’s the role he was born to play.