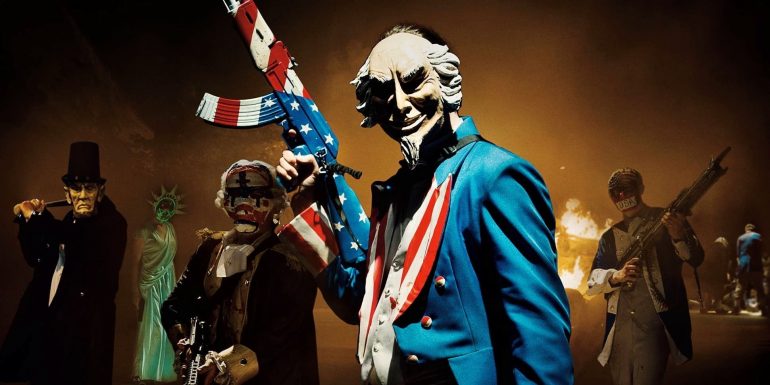 The Purge: Election Year isn’t as good as the second movie and if you didn’t like that then this won’t convince you to the series; the politics aren’t remotely subtle but it’s got a great badass hero in Frank Grillo and some decent R rated moments.

Plot: As a young girl, Sen. Charlie Roan survived the annual night of lawlessness that took the lives of her family members. As a presidential candidate, Roan is determined to end the yearly tradition of blood lust once and for all. When her opponents hatch a deadly scheme, the senator finds herself trapped on the streets of Washington, D.C., just as the latest Purge gets underway. Now, it’s up to Leo Barnes (Frank Grillo), her head of security, to keep her alive during the next 12 hours of mayhem.

Review: The Purge series is definitely a franchise for our times; focusing on the political and social unrest that is currently going on in America and all of the anxieties felt by both sides.

These movies can’t really be taken all that seriously though because the concept is so silly and I never find them as disturbing as they should be. If this series was made in the 70’s and we had Charles Bronson in them, now THAT would be something worth watching.

Election Year is still pretty entertaining though and it’s Frank Grillo’s badassery that keeps things interesting; I think he’s one of the best actors working in action movies today as he has that natural toughness to him making him feel authentic.

Elizabeth Mitchell’s Senator Roan is tediously idealistic and basically comes across as a better looking Hillary Clinton; she was one of those bleeding heart characters who doesn’t feel all that believable and spends most of the story whining/preaching.

I loved seeing Mykelti Williamson in such a major role and his character Joe Dixon feels like a real person with real problems; he’s a hero in every sense of the word and helped to keep the hyper-reality more grounded.

Like the second movie The Purge: Election Year has a surreal, dreamlike style to it making it feel like a fantasy movie which essentially it is. There are some fun R rated moments but we never really get a sense of true anarchy. Considering it’s meant to be Purge night, how come the streets are so quiet? There were like 3 groups of Purgers in the whole movie so it lacks that real sense of scale or threat.

By the end of the movie you’ll barely remember anything about it and the script had no memorable dialogue but at least there isn’t anything clunky.

Overall, The Purge: Election Year isn’t as good as the second movie and if you didn’t like that then this won’t convince you to the series; the politics aren’t remotely subtle but it’s got a great badass hero in Frank Grillo and some decent R rated moments. Just don’t expect to think about it ever again after the end credits.