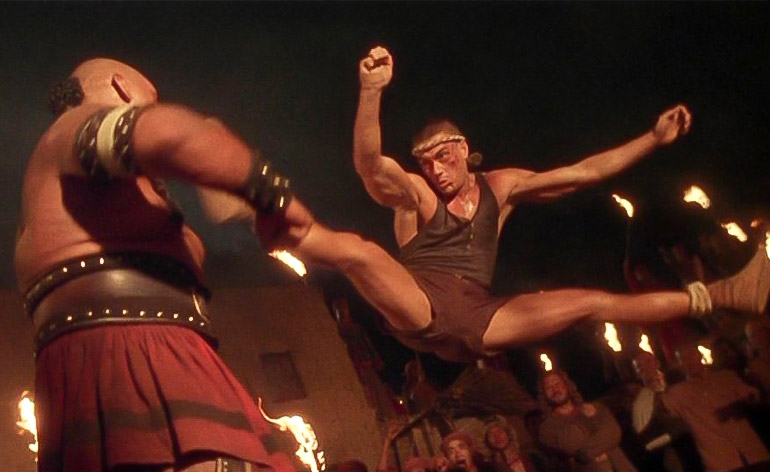 Plot: Acclaimed action superstar Jean-Claude Van Damme directs and stars in The Quest, an exotic odyssey that takes him from the slums of 1920s New York to the mysterious Lost City of Tibet.

Christopher Dubois (Van Damme) is a street criminal on the run from the police, thrust into a forbidding realm of gun smugglers, pirates and an ancient, underworld martial arts competition. The legendary contest, known as the Ghan-gheng, pits the world’s deadliest fighters against each other in a furious winner-takes-all battle. Forced to compete, Dubois faces the ultimate test of manhood where one wrong move could cost him not only the competition, but his life.

The Quest was JCVD’s directorial début and I’m surprised he hasn’t directed since as it looks fantastic, has great fight scenes and an epic-sounding score by Randy Edelman.

I thought today I would take a look at two different Blu-rays of the film rather than doing the usual review. The German Platinum Cult Edition of The Quest came out in 2013; the film has been perfectly remastered with flawless picture and excellent 5.1 surround sound. As The Quest always looked great it was important for it to get a decent HD transfer and this is definitely it. There are stunning landscape shots throughout the movie which now look better than ever.

Special features on the Blu-ray include behind scenes videos and galleries, interviews with JCVD and Roger Moore and more but for some reason I can only get them to work on certain Blu-ray players; the movie plays fine but the special features are annoyingly unresponsive which is quite frustrating. I have a multi-region Blu-ray player so there’s no reason for it to not work properly.

The production of The Quest apparently wasn’t a happy one; according to IMDB Frank Dux apparently sued Jean-Claude Van Damme over the writing credits of the movie, claiming that Van Damme and he wrote the story together under the title “The Kumite: Enter the New Dragon” in 1991. JCVD denied this, claiming the two projects were unrelated. Dux won his story credit via a ruling of the Writer’s Guild of America but lost the actual court case.

The Quest definitely has a Bloodsport feel to it and would be a fitting double bill although it’s not quite as good as the 1988 classic.

So let’s talk about the movie itself; I never thought I’d see a movie with Van Damme and James Bond (Roger Moore) together but here it is. Jean-Claude has rarely been in better shape, looking mean as Hell and built like a tank; he has some great fighting moves in The Quest, even working in some Muay Thai. The martial arts on display are the highlight of the movie with fighters from all over the world displaying their rather amazing talents. The only element which bothered me was the over-use of slow motion during the fights which took away some of the intensity from them.

It was only after watching the movie recently that I’d discovered it was PG-13; I’m pretty sure some of the violence was cut as the film was either a 15 or 18 in the UK. It didn’t ruin the fight scenes, however, they are rather bloodless which takes way a bit of the realism. This “Uncut” version is exactly the same as every other version I’ve seen of The Quest so I think that’s merely on the cover to encourage people to buy it.

Despite the lack of blood, the film is like an old-fashioned adventure film with hints of Indiana Jones and a fun epic feel.

JCVD’s character Christopher Duboit is quite naïve and easily misled which makes him more interesting than your average martial arts movie badass.

It’s hard to believe that actor Abdel Qissi who plays Mongolian fighter Khan is the same guy who plays Attila in Lionheart as he looks totally different. His fighting style is never flashy but relies purely on his immense size and brute strength. He never speaks a word in this movie but is still an intimidating presence and is essentially the same character as Chong Li was in Bloodsport.

Roger Moore is at his raised eyebrow best as likeable rogue Captain Dobbs and you can’t help but smile when he’s on screen; after the movie was completed Moore described The Quest as one of the worst he’s done. I think that’s a little unfair; sure it is quite corny in parts but I think it’s got plenty to enjoy and if you’re a Jean-Claude Van Damme completist like I am then you’ll have a good time.

Overall, The Platinum Cult Edition of The Quest is beautifully remastered with crisp images and sound but the temperamental special features do get frustrating on different machines.

I also have The Quest on DVD but whenever I see a new version of any Van Damme movie I have to buy it so when I was on a trip back to the UK recently I saw the 101 Films Blu-ray so needless to say I had to have it. It doesn’t have as many special features as the Platinum Cult version but at least they all work here.

I would have liked to see at least some archived JCVD or Roger Moore interviews here but what we get is still entertaining especially the interview with Jack McGee who talks about working with Roger Moore and how they became good friends after this film. Mike Lambert who played the “Scottish” fighter (who isn’t Scottish) talks about working on the film too and we get commentaries from Mike Leeder and Arne Venema.

After watching both versions I think I’ll have to go with the 101 Films Blu-ray due to all the tech issues I have playing the special features on the Platinum Cult Edition. I don’t regret owning either version but if you want to own The Quest on Blu-ray and have a region free player then go for the 101 Films edition.