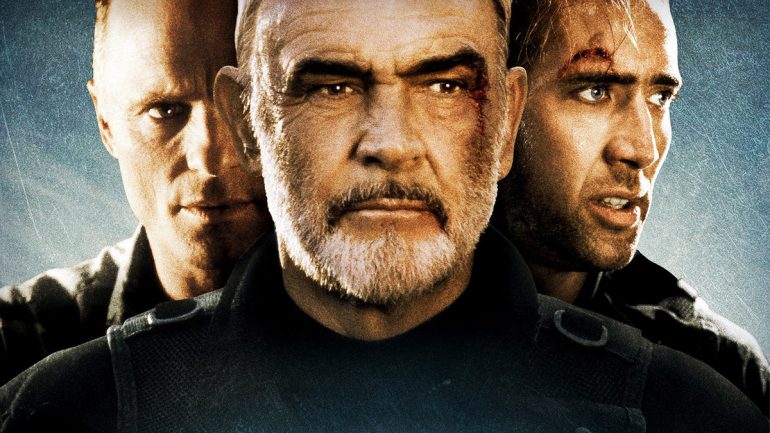 The Rock is one of the best actioners of the 90’s and also one of my all time favourite action movies.

Plot: A mild-mannered chemist and an ex-con must lead the counterstrike when a rogue group of military men, led by a renegade general, threaten a nerve gas attack from Alcatraz against San Francisco.

Review: The Rock remains Michael Bay’s finest hour; I miss this Bay. When he first came on the scene The Rock & Bad Boys were beautifully shot, had great action scenes and weren’t just made to sell toys.

Nic Cage plays Stanley Goodspeed, a chemical superfreak who has to join up with Sean Connery’s John Mason. Together they have to try and stop a rogue General (Ed Harris) from firing VX Poison gas at San Francisco from his location on Alcatraz (The Rock).

The action scenes in this film are spectacular and we even get a car chase that nearly rivals Bullitt’s through the streets of San Francisco. The only thing is, when Stanley is on his cell phone while riding on someone’s bike, if you pause at just the right second, you can see the stuntman on the bike which does take you out of it a little.

Nic Cage doesn’t overact (too much) in this one and I think this is one of the best roles he’s ever played. Sean Connery plays… well Sean Connery, he doesn’t need to do anything else; he’s bloody Sean Connery! The banter between the two leads is hilarious and keeps the tone rather light.

Michael Biehn has a supporting role as one of the Navy SEALS helping Goodpseed/Mason get onto The Rock. Although his role is quite small he is, as always fantastic; he’s believable and authentic making you feel that he is a genuine Marine with his quiet authority.

One of the most interesting things about The Rock is Ed Harris as General Hummell. He’s not some nutjob who wants to destroy mankind. He’s a respected military leader who feels that his country let down its soldiers and he wants compensation for their families. There is of course, more to it than that but I’m not going to spoil the movie. Harris makes Hummell sympathetic and despite his methods you kinda want him to succeed.

The always great David Morse provides support to Hummell; he is a very truthful actor. No matter what role he plays, he inhabits the role and he is no longer David Morse, he’s the character.

My favourite element of the movie is Hans Zimmer’s score which is arguably his best ever, alongside Gladiator; it’s tuneful, bombastic and exciting. The infiltration of the military facility at the start is one of the many musical highlights.

Admittedly some of the dialogue is a little cheesy but nothing as bad as the Transformers movies; there’s no “comic” relief here, just some bickering between Connery & Cage.

There’s one scene though which has always annoyed me as a Scot, where Connery has a fight with one of the bad guys. The bad guy says “English bastard, did I tell you my old man was Irish?” Wow, that’s great mate, but guess what? Glasgow isn’t in England, it’s in SCOTLAND! I am still disappointed that Connery didn’t even say a retort. Not a massive deal but it still annoys me to this day.

Overall, The Rock is one of the best actioners of the 90’s and also one of my all time favourite action movies. Come on Michael Bay, make another movie like this. Enough with the toy commercials!