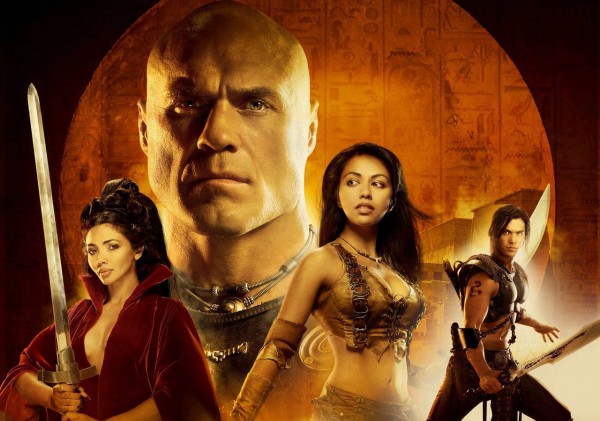 The Scorpion King: Rise of a Warrior (2008) Review

If you want a decent Barbarian movie then seek out Conan and if you want more epic fantasy then best watch LOTR instead.

Plot: When young Mathayus witnesses his father’s death at the hands of an evil military commander, his quest for vengeance transforms him into the most feared warrior of the ancient world.

Review: I enjoy a cheesy fantasy pic as much as the next guy and the first Scorpion King movie was a lot of fun, but I have to say that The Scorpion King: Rise of a Warrior is unbelievably lame.

The “special” effects are appalling and sadly the acting isn’t much better. I know it’s a low budget, straight to DVD movie, but really, that’s no excuse for how bad nearly every aspect of this movie is.

I’m a huge fan of the director Russell Mulcahy (Highlander) and I hate to see him wasting his talents on dreck like this.

I think very young kids might enjoy it as that is clearly the target market; there isn’t much that adults would be interested in aside from the gorgeous Karen David who plays love interest Layla.

Randy Couture plays the villain and is arguably more convincing than he is as a good guy, but he doesn’t really have much to do.

There are a couple of decent moments of action towards the end, but nothing really stand-out. Like I touched on earlier, it’s let down by some of the worst CG I’ve ever seen and it makes Sy-Fy movies look like big budget blockbusters by comparison.

Michael Copon (Mathayus) does the best with what he’s given but ultimately he and the rest of the film are pretty forgettable.  Mathayus is meant to be this great fearful warrior but Copon doesn’t come across as remotely intimidating and lacks credibility… because a movie like this is all about authenticity…

Overall, if you want a decent Barbarian movie then seek out Conan and if you want more epic fantasy then best watch LOTR instead.