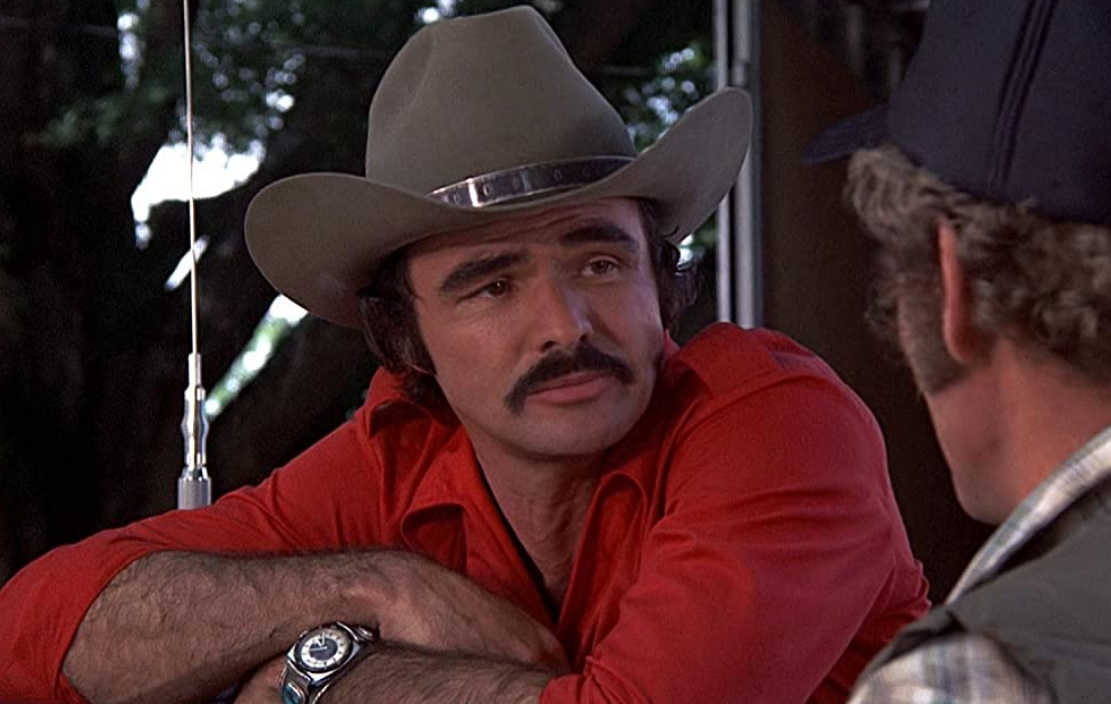 The Smokey and the Bandit Franchise: A Retrospective

Before The Cannonball Run there was Smokey and the Bandit; a few months ago I picked up the Outlaw Collection featuring all 7 movies in the Smokey and the Bandit series; it was only recently that I found out there were more than three but there are in fact four made for television movies which I am mostly ignoring here as they are pretty much unwatchable. So strap in and let’s take a ride with Burt Reynolds and Jackie Gleeson as we look back at Smokey and the Bandit.

Plot: The Bandit is hired on to run a tractor-trailer full of beer over state lines, in hot pursuit by a pesky sheriff.

Smokey and the Bandit is one of the classic car caper movies that came out around the late 70’s and 80’s and to this day is still pure joy to watch. Burt Reynolds is at his cool but hilarious best clearly just enjoying every minute as Bandit, the “legend” who has never failed on a job.

He and his partner Cledus (Jerry Reed) agree to transport a truck full of beer across State lines and hilarious hijinks ensue. Sally Field also joins them and was very good at comedy; she was Reynolds’ girlfriend in real life which explains why she had genuine chemistry with him on screen.

It benefits from watching with subtitles as there is a lot of radio slang so you may not always understand what they’re saying. Believe it or not growing up I had a duvet cover and pillowcases with trucks and radio slang on it. I have no idea where we got it from but it was always my favourite.

Anyway, Smokey and the Bandit is still wonderful escapist fun, but the movie is really stolen by the hateful Sheriff Buford T. Justice who is a bullying jerk played to perfection by Jackie Gleeson. What’s funny is that the studio didn’t initially want him as the Sheriff, but Reynolds said if he wasn’t in the movie then the movie isn’t happening. They made the right choice as I couldn’t picture anyone else in the role. Gleeson has some amazing dialogue and I love the running joke where his son has to hold his hat on while he’s driving which just adds to the absurdity of it all.

In a surprising piece of trivia I found on IMDb Buford T. Justice was actually the name of a real Florida Highway Patrolman known to Burt Reynolds’ father who was once Chief of Police of Jupiter, Florida.

There are some incredible stunts and the entire movie is practically one big car chase (with a brief bar fight) but I think it they remade it today it would likely have a massive budget.

The music is perfect for it too especially Eastbound and Down by Jerry Reed (who plays Cledus) and Bill Justis.

There isn’t much to it in terms of story or characterization and there doesn’t need to be; this movie wants to do nothing but entertain and that’s exactly what it does.

Overall, Smokey and the Bandit is every bit as fun now as it was when it first came out so if you want a film that is out to make you smile then strap in and enjoy the ride.

Plot: It’s been a few years since Cletus and the Bandit made their famous 28-hour run to Texas for a few cases of Coors. Bandit is now a washed-up has-been living in the past, until Big Enos and Little Enos make him another offer: Transport a live Elephant across country in 3 days or less.

The gang’s all here in this entertaining sequel which ups the hijinks and brings back Burt Reynolds, Sally Field, Jackie Gleeson and Jerry Reed.

This time the crew are transporting an elephant across the country (because of course) and it’s just an excuse for more vehicular carnage and zany humour. New to the cast is the great Dom DeLuise who plays Italian doctor known as… Doc and if you watch the outtakes at the end he struggles to keep a straight face throughout. Sally Field looks like she isn’t a lot of fun to work with in these scenes as she looks like she is getting annoyed with all the laughter. How dare they!

There is more characterization this time around and Bandit and Frog have broken up; he has turned to drinking and feeling sorry for himself losing the spark he had in the first film. Cledus calls up Frog and tells her about this new trip they have scheduled and the money involved so she decides to tag along. We get the usual post-relationship bickering but we discover that Bandit misses the thrill of being loved by everyone and being famous so his journey is to begin to love himself again so he can love Frog too.

Once again Buford T. Justice (Jackie Gleason) returns in hot pursuit with his son Junior and has a lot of the best dialogue once again. I did find the script isn’t quite as sharp this time around but it’s still lighthearted fluff and the action scenes are arguably even better than the first. Not only do we have car chases and crashes with incredible stunts but we have a rollercoaster exploding and collapsing and then for the climax we’ve got the biggest game of chicken ever as a horde of trucks takes on a bunch of cop cars. It’s fast paced and never dull keeping things exciting and fun.

Overall, Smokey and the Bandit II is another helluva good time with surprising character development and insane car action and stunts making it a worthy follow up to the original classic.

Plot: Big and Little Enos are opening a sea food restaurant. They bet Sheriff Buford T. Justice that he cannot drive from Miami to the Enos ranch in Texas in a given amount of time. If Buford loses he has to give up his badge.

I was reading on IMDb that this third entry in this series was initially titled “Smokey and the Bandit Part 3: Smokey Is The Bandit”, with Jackie Gleason playing both Sheriff Justice and The Bandit. Apparently test audiences disliked seeing Gleason as The Bandit and parts of the film were re-shot with Jerry Reed reprising his role of Cledus who was now the new “Bandit”.

Sadly Burt Reynolds and Sally Field do not return for this movie although Reynolds does have a cameo at the end. Jackie Gleeson as Buford T. Justice is back and is ready to retire but he is challenged to travel across country by Big and Little Enos who are opening a sea food restaurant so they ask Justice to travel with a pretend fish (don’t ask) with his son.

Jerry Reed also returns as Cledus and this time he is The Bandit as he races across country and once again Buford is in pursuit as he wants to prove that he didn’t fail at capturing the legendary Bandit.

Without Reynolds it’s hard to be quite as interested but Reed is enjoyable as he tries to keep up with the legend of The Bandit. Gleeson has the usual fun lines although once again the script isn’t all that funny so the first entry is still the best.

There is as always some nice stuntwork here and it keeps moving at a brisk pace but the formula was starting to get a little stale at this stage.

Overall, Smokey and the Bandit III isn’t a patch on the first two films and Burt Reynolds is sorely missed; there is some decent stuntwork as usual making it maybe worth checking out.

There are four TV movies which are sort of prequels to the Smokey and the Bandit movies, but I’ve never been able to sit through them all as they are that bad and bear little to no resemblance to the original trilogy.

The first movie was Bandit: Bandit Goes Country from 1994 and the only two familiar faces are Elizabeth Berkley and Tyler Mane; other than that most of the movie is set in a small country town and has Bandit (Brian Bloom AKA Pike from 2010 The A-Team movie) trying to rekindle a romance with an old flame (Berkley). This lacks the fun and crazy sense of humour of the original movies and there is no reason for it to exist.

The three other movies entitled Bandit: Bandit Bandit, Bandit: Beauty and the Bandit and Bandit: Bandit’s Silver Angel all came out in 1994 are mostly unwatchable. Bloom would play Bandit in all 4 and admittedly he brings the right amount of cockiness to the role, but they all look so cheap and feel like the made for TV movies that they are. There are a few punch ups and the odd bit of vehicular action but they never live up to the crazed spectacle of the originals.

Overall, just stick with the first three movies and pretend these don’t exist. I hope they never remake Smokey and the Bandit as the first three movies were a product of their time with their crazy humour and stuntwork we just don’t see anymore. There is no one today who could match Burt Reynolds or Jackie Gleeson so let’s just leave it in the past.