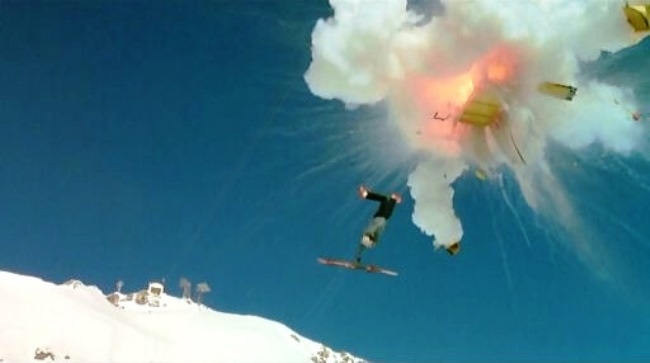 The Soldier is a very entertaining action thriller with a great story, but the final act is disappointing and it lacks a villain.

Plot: Terrorists take over a plutonium bomb and threaten to detonate it in a Saudi Arabian oil field. A special anti-terrorist unit is sent in to stop them.

Review: You ever wanted to see what James Bond would be like if it was rated hard R? This is (sorta) what it would be like. The Soldier has some great action and violence; the best action scene is an awesome ski chase in pure Bond style… except with Uzis and blood.

The film is very short, in fact too short; it lacks a villain and it sort of fizzles out. There is no big action set-piece at the end, which is a shame as it starts off really strong and has some great action in the first half. You’ll not be bored though, that’s for sure and it’s definitely worth a watch.

The music score is quite Carpenter-esque and cool but there are parts which are really cheap and dated sounding. You can forgive it seeing as it’s 30 years old.

Ken Wahl was decent enough as The Soldier, but there just seemed to be too many characters and it’s like they ran out of budget half way through.

You do get the bonus of a scene with Klaus Kinski in it which classes it up and the story is excellent and remains current today as well.

It does get quite tense in places and there is the obligatory bar fight with racist rednecks getting beaten up, which is always satisfying.

Overall, The Soldier is a very entertaining action thriller with a great story, but the final act is disappointing and it lacks a villain.