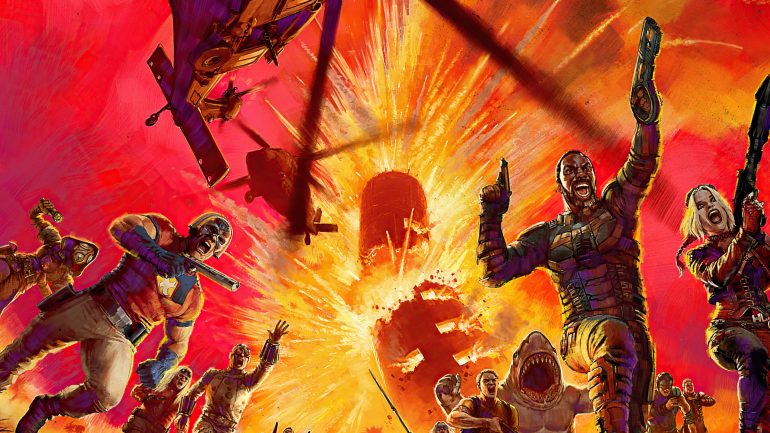 The Suicide Squad has its moments and there are some wonderfully imaginative R rated scenes and nice touches of humour; it’s utterly ridiculous however, and it totally lost me by the finale but if you’re a fan of the comics then you’ll likely find more to enjoy.

Plot: The government sends the most dangerous supervillains in the world — Bloodsport, Peacemaker, King Shark, Harley Quinn and others — to the remote, enemy-infused island of Corto Maltese. Armed with high-tech weapons, they trek through the dangerous jungle on a search-and-destroy mission, with only Col. Rick Flag on the ground to make them behave.

Review: I’m not a huge comic book guy as you know (aside from maybe Batman & The Punisher) so I had no real interest in watching The Suicide Squad but it had been getting generally rave reviews and the idea of Sylvester Stallone voicing King Shark had me curious. It took me a while to actually get used to watching a movie featuring a talking shark but I figured it was time to check it out.

There are those of you who will love this movie as you’ll just “get” what director James Gunn was going for; this was exactly the movie he set out to make so good for him for getting to release the movie without any studio interference.  Whether this is your cup of tea is entirely up to you and your tastes as a viewer but we have some of the most outlandish comic book characters ever conceived brought to life like Polka Dot Man, Ratcatcher 2, Javelin and more so once again James Gunn knew exactly what he was doing and wanted to make one of the craziest superhero movies you’ve ever seen which it admittedly is.

Sadly, I don’t really think I am the target audience for this movie; there were elements I enjoyed like the hard R violence with exploding heads and gruesome kills. I also liked the banter between Idris Elba’s Bloodsport and John Cena’s Peacemaker. There were some nice practical effects including squibs and even real explosions so it did have that old-school men-on-a-mission feel to it.

I also liked that not everyone survived so it kept you on your toes wondering who will buy it next. There were a few funny moments especially in the first half and I liked how Bloodsport mentions the Dim Mak which fans of the JCVD classic will smile at. Margot Robbie is once again entertaining as Harley Quinn and the scene with her escaping from the compound and taking out the trash was an action highlight.

I was nearly going to give this 3 stars but then the final 25 minutes happened… so spoiler alert if you don’t want anything ruined for you.

A giant alien starfish which had ben captured by the US escapes from a lab and destroys the city of Corto Maltese so it’s up to Task Force X AKA The Suicide Squad to save the day. Read what I just said again… a giant starfish attacks a city…

So The Suicide Squad is one of the most ridiculous movies you’ll ever see and I generally like to keep an open mind… but a starfish? If you can enjoy it for the nonsense that it is then I applaud you but this was just too out there for my tastes. I nearly turned it off before the end but I always want to make sure I see the entire film (and the post-credits scenes) to make sure I can do a balanced review.

Overall, The Suicide Squad is the most bonkers movie of the year but whether that’s a good thing or not is entirely up to you. It has some imaginative and gory kills and Idris Elba nearly steals the show as Bloodsport but it lost me by the finale and I can totally understand why so many of you turned it off early on. If you enjoy this movie then fair play to you but this really wasn’t my bag.