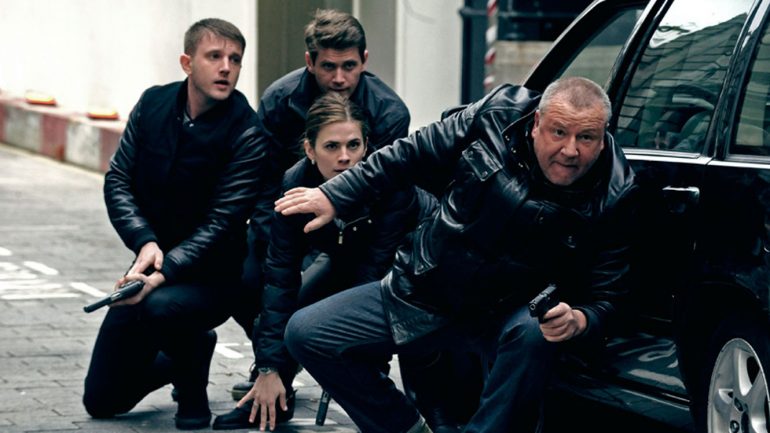 If you’re looking for a tough as nails cop thriller which is truly of the old-school then check this out, it really is one of the best action movies of 2012.

Plot: Jack Regan’s unsubtle police methods get him imprisoned. With the help of his protege and some string pulling, he is released to catch the villains that threaten his department.

Review: If you’re not from Britain then you’re probably not familiar with this classic TV series from the 70’s which starred the late, great John Thaw. The story is basically about a hard ass detective (Ray Winstone) in the Flying Squad of London’s Metropolitan police and his equally hard younger partner (Ben Drew).

I didn’t really know what to expect from this movie so I had no expectations, I had no idea what a treat I was in for. It’s one of the best cop movies of recent times and a tough as nails action thriller. Everyone calls each other a “cahnt” or says “fack off” a lot, so my North American friends may not understand what people are saying. I understood it just fine and I think Ray Winstone wins the award for badass of the year.

He’s just a force of nature in the movie and God help anyone who should spill his pint. Like Jason Statham, he’s utterly authentic when he plays a tough guy and you believe he will kick your teeth out without a moments hesitation.

Ben Drew is also great in his role and you just feel like he’s going to explode at any time, he emanates menace in this movie… and he’s the good guy. It’s the kinda movie where no one is particularly nice, they are who they are because it’s necessary to get the job done.

This is a hardcore, violent cop movie which reminded me of Michael Mann’s Heat, but obviously not in the same league. Actually it reminded me of several other movies, so it isn’t anything particularly original.

The Sweeney is however, beautifully shot and it has a sense of scale too. Normally with British movies, they are grimy and depressing and it constantly rains, but Nick Love directs the hell out of this movie. Great pacing, good action and everyone just feels like they aren’t acting.

The one thing which stood out in the movie was the music score which for some reason sounded like Tron: Legacy and no that is not a complaint. It’s one of the best music scores of the year and yet another reason to put the Sweeney on your “must see” list.

Overall, if you’re looking for a tough as nails cop thriller which is truly of the old-school then check this out, it really is one of the best action movies of 2012.