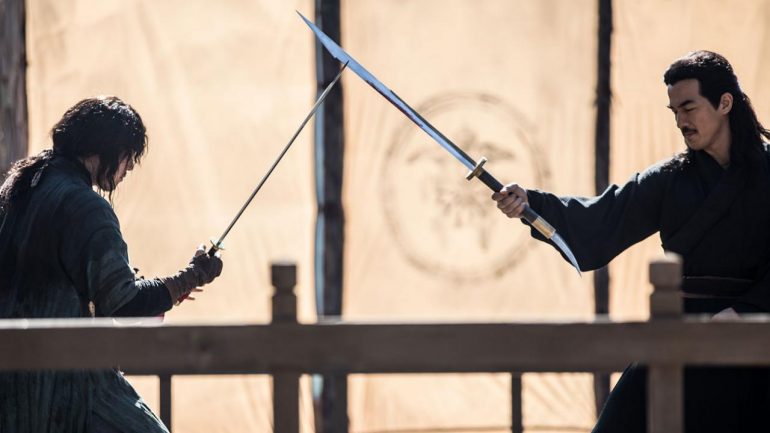 Despite the slow start The Swordsman lets us get to know and care about our characters but when the action comes it’s worth the wait and Joe Taslim is wonderfully hateful as the villain.

Plot: After being blinded in a coup against the king, Joseon’s greatest swordsman (Jang Hyuk) goes into hiding, far removed from his city’s anguish. But when traffickers kidnap his daughter, he has no choice but to unsheathe his sword once more.

Review: I’d heard some promising early reviews for The Swordsman, and I’m pleased to say that it lived up to my expectations. The first 45 minutes are admittedly a little slow but it’s establishing characters and the story, so we get emotionally engaged.

Tae-yul (Jang Hyuk) is losing his eyesight and is a quiet man but his actions speak louder than words after his daughter Tae-ok (Hyeon-soo Kim) is kidnapped by traffickers.

Our main antagonist is Gurutai played by the always amazing Joe Taslim who makes the character utterly despicable. His arrogant sneer makes you hate him immediately and you can guarantee when Tae-yul eventually catches up to him it’s going to be a battle for the ages.

Despite the slow first half it really pulled me into the world as we got to know Tae-yul and Tae-ok; he wants to keep her up in the hills away from danger while she wants to go into town and see the world. Tae-yul has his reasons for wanting to protect her which I won’t go into here in case it’s a spoiler.

Any movie with ninjas in it is already borderline classic in my book even if they are just fodder to be disposed of by Tae-yul’s blade.

When Tae-yul’s swordplay skills are truly revealed it’s a sight to behold and the action looks fantastic so we see and feel every slice and dice. The final 50 minutes never lets up and shouldn’t disappoint any action fan as it has an impressive bodycount.

The Swordsman looks stylish and has a beautifully moving music score that really helps to bring you into the story. It also some memorable dialogue like “You insisted on fighting; do not resent me for dying”.

Overall, The Swordsman takes a little while before the action kicks in but it’s worth the wait and it’s arguably one of the best action movies of the year so far.