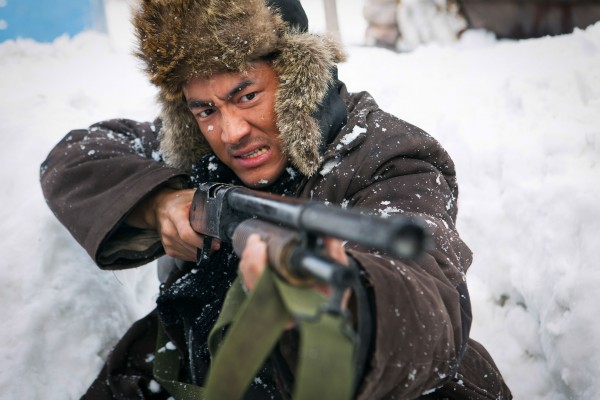 The Taking of Tiger Mountain (2015) Review

The Taking of Tiger Mountain is an exciting adventure movie with an engaging story and fun characters; it could have had several moments cut for pacing reasons but it’s still a good time.

Plot: Tsui Hark’s thrilling adaptation of Qu Bo’s beloved adventure novel stars Tony LEUNG Ka-fai as a ruthless bandit, ruling the lands of Northeast China from his fortress on Tiger Mountain. A captain of the Liberation Army (LIN Gengxin) launches a counter-insurgency against the dictator with a skilled investigator (ZHANG Hanyu) sent to destroy the gang from the inside.

Review: Legendary action director Tsui Hark returns with this boy’s own adventure movie based on the novel Tracks in the Snowy Forest by Qu Bo.

With elements of fantasy, an unpredictable story and memorable characters The Taking of Tiger Mountain proves to be one of Hark’s better pictures of late.

Tony Leung is unrecognizable as the villainous Hawk who is mysterious, creepy and incredibly powerful. Everyone is scared of him and it’s easy to see why; he’s an imposing figure and his raspy yet soft spoken voice just makes him even scarier.

There are a few too many other characters which makes it a little hard to follow at times and the modern day scenes at the beginning and end add nothing to the story. They could easily have been chopped to lower the already long running time. The alternate ending involving the poorly CGI’d plane adds nothing and would have been better left in the editing room.

There is the odd pacing issue in the mid-section of the film where very little happens and it takes away from some of the tension.

There is a spectacular action sequence about an hour and 20 minutes into it which is the highlight of the film; we have soldiers on skis performing rather awesome stunts and giving us a battle scene quite different from what we’ve seen before.

Zhang Hanyu is almost impossibly cool in this movie and at first you aren’t sure if he can be trusted ad that’s what keeps you on your toes throughout.

Lin Gengxin is also likeable as the head of the Liberation Army Shao Jianbo, although he isn’t quite as fleshed out or as interesting as Zirong.

The bandits are really just cartoons brought to life with bizarre make up and outfits making them not all that threatening but still fun to watch.

There are some enjoyable moments of tension throughout as we wonder if Zirong will be found out while undercover with the bandits. We are given several red herrings where we think he will be discovered but his quick thinking tends to save the day.

There is some CG like I mentioned and it’s not the greatest, but it’s minimally used and doesn’t really detract from the otherwise thrilling action scenes.

Overall, The Taking of Tiger Mountain is an exciting adventure movie with an engaging story and fun characters; it could have had several moments cut for pacing reasons but it’s still a good time.