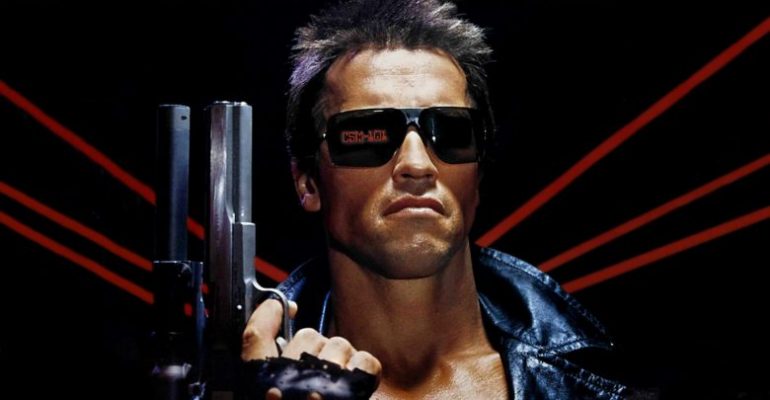 The Terminator remains a seminal sci-fi action film with Arnold on iconic form with stunning performances from Michael Biehn and Linda Hamilton. It is packed with action and an intensity few of the late sequels would retain.

Plot: Disguised as a human, a cyborg assassin known as a Terminator (Arnold Schwarzenegger) travels from 2029 to 1984 to kill Sarah Connor (Linda Hamilton). Sent to protect Sarah is Kyle Reese (Michael Biehn), who divulges the coming of Skynet, an artificial intelligence system that will spark a nuclear holocaust. Sarah is targeted because Skynet knows that her unborn son will lead the fight against them. With the virtually unstoppable Terminator in hot pursuit, she and Kyle attempt to escape.

The machines rose from the ashes of the nuclear fire. Their war to exterminate mankind had raged for decades, but the final battle would not be fought in the future. It would be fought here, in our present. Tonight…

This week marks the 36th anniversary of James Cameron’s seminal sci-fi opus The Terminator and I just noticed that I have never actually reviewed it on the site! For shame!

Anyway, there isn’t much that hasn’t already been said about this movie but the story is every bit as relatable now as it was back in 1984 if not even more so.

Our reliance on technology has never been greater and one could argue that machines have already taken over our lives as we spend our days looking at our phones. Terminator is the perfect tale of paranoia feeling more like a slasher movie than an action picture but it manages to mix both together nicely.

Linda Hamilton just embodies Sarah Connor in every way; she makes her incredibly sympathetic and we root for her from the very start. Watching her go from a meek waitress who is utterly terrified (of not only the Terminator but also what the future holds) into the crazed warrior she becomes in T2 is one of my favourite character arcs in the genre proving what a gifted actress she is.

I’ve never been able to accept anyone else as Kyle Reese (although Anton Yelchin did well in Salvation) as Michael Biehn was born for the role; his wild eyes make him come across as someone who is truly desperate and it’s understandable why Sarah is at first reticent to go anywhere with him. As I’ve said before Biehn has this talent of never seeming like he’s acting, he just is that character and that’s how I’ve always felt about Reese.

This was the movie that put Arnold Schwarzenegger on the map as the next huge action star and it’s easy to see why; Arnie’s incarnation as the cold and ruthless T-800 has never been bettered since. I do miss the evil Arnold as he captured the machine-like movements of the Terminator in little things like the way he turns his head left and right while driving, always watching and he will never, ever stop. His assault on the police station where he says his iconic “I’ll be Back” line is my favourite scene of the franchise as it demonstrates how unstoppable these machines are.

In terms of flaws we can all agree that some of the music and special effects don’t hold up that well but it doesn’t bother me as it all just adds to the gritty look of the tale. It feels grimy and the post-apocalyptic battle scenes are truly the stuff of nightmares. The Tech Noir club scene is also really responsible in part for the synthwave music style in terms of the neon-infused visuals and synth score.

There is a fantastic supporting cast of soon-to-be-famous actors like Lance Henriksen, Brian Thompson and Bill Paxton who would all go on to have strong careers.

Aside from Arnold’s classic lines there are also some other choice pieces of dialogue like Reese’s speech to Sarah as he tries to convince her what is happening: “Listen and understand! That Terminator is out there! It can’t be bargained with. It can’t be reasoned with. It doesn’t feel pity, or remorse, or fear. And it absolutely will not stop… ever, until you are dead!”

Overall, The Terminator is every bit as terrifying a concept as it was back in 1984 with Arnold, Biehn and Hamilton all at the top of their games. It never slows down for a second and there isn’t a single dull moment keeping you glued from beginning to end. The subtext is even more relevant now with our over-reliance on our phones so it’s a welcome lesson that we all still need to learn.