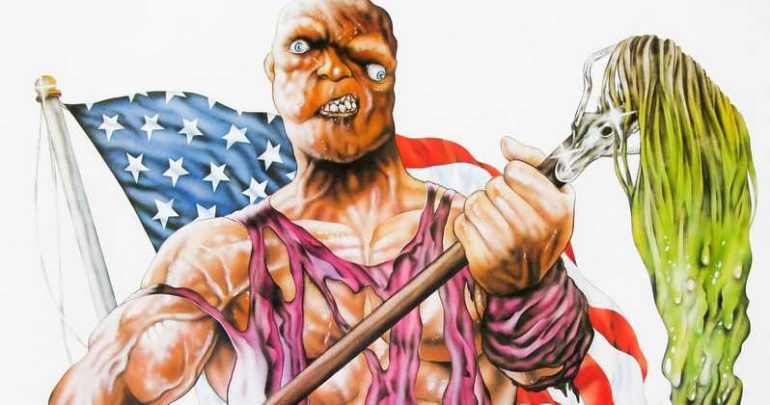 The Toxic Avenger is a classic splatterfest with boobs and gore aplenty. Enjoy!

Plot: Tromaville has a monstrous new hero. The Toxic Avenger is born when mop boy Melvin Junko falls into a vat of toxic waste. Now evildoers will have a lot to lose.

Review: I never really got into Lloyd Kaufman’s movies as a kid as they were just a bit too weird but watching them as an adult is a far more entertaining experience.

I think it’s safe to say that this is the dumbest movie I’ve ever seen; it’s just absolute craziness… probably why I enjoyed it so much. It has hilariously over the top gore and is the very definition of “Splatterfest”. Every girl is wearing a bikini, there’s plenty of sex and violence and the acting is utterly appalling, which is why it’s so entertaining.

Everyone involved knows it’s bad and that’s the point as it’s all part of the fun. Keep your eyes open for a young Patrick Kilpatrick who plays a bad guy that gets his comeuppance in a funny yet awful way. This is one of the goriest movies I’ve ever seen with heads being squashed and limbs being ripped off but it’s never offensive, just pure outrageous silliness.

At times the tone is a little off where it’s the kind of film that makes you feel uncomfortable all the way through and at times you’re not sure how to react. I was in hysterics though as some of the character names are really out there; Dr. Snodburger and Nipples were two stand outs.

There is some really bad dubbing too but once again that’s the point; the movie is trash and it knows it.

At just under 90 minutes it moves along at a fast pace but this movie is definitely an acquired taste; it must have caught me in the right mood as I mostly enjoyed it but I have no real desire to sit through it again.

Overall, The Toxic Avenger isn’t for everyone with awesome gore effects and an uneven tone but with a few beers and some buddies you could have a blast with it. Just don’t eat anything while watching.