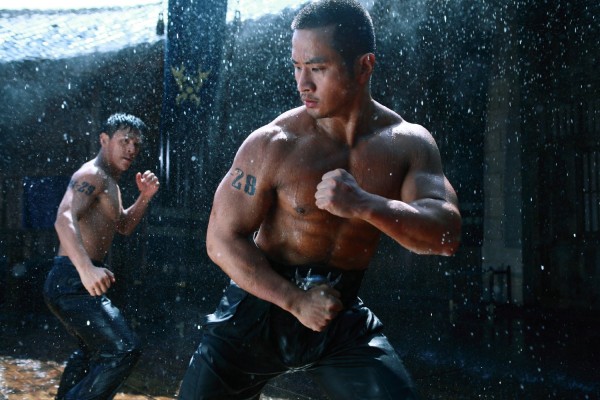 The Wrath of Vajra is well paced and with a fight scene every 2 minutes, you could do a lot worse than watching this on a Saturday night; or you could even watch it on a Sunday, go nuts.

Plot: Before the West entered World War II, a Japanese death cult called the Temple of Hades is ordered to aid in the spiritual destruction of China. Their method – abduct their enemies’ children and train them as killers for the Emperor. Young Vajra was especially gifted, but swears a secret oath of revenge when his brother dies. Now the greatest assassin in the temple, Vajra escapes to China and begins his quest to protect the innocent, and destroy the ones responsible for making him a living weapon.

Review: The Wrath of Vajra is a pretty spectacular martial arts movie which stars Shi Yanneng, a former Shaolin monk turned action star. I have to admit he’s not exactly Captain Personality in this movie but by God the man can fight. That is really the character he’s playing though rather than his acting ability.

The film doesn’t skimp on brutal fight scenes which are amazing to witness; the highlight is K-29 (Shi) fighting Crazy Monkey (Poppin Hyun-Joon), a Gollum-style fighter who jumps around in an inhuman fashion. He’s really creepy and will make your skin crawl but once again he’s an amazing martial artist and the scene is an original twist for the genre.

Although you can pretty much tell which way the story is going to go, it’s immediately engaging and the main characters are suitably well developed. I liked how the relationship between K-29 and the main villain played by (former Korean American pop star) Sung-jun Yoo is a friendship gone sour. Sung-jun Yoo still wants to be friends and hates that they have become enemies due to their different beliefs.

That’s about as deep as it gets though as really it’s just an excuse for people to beat the crap out of each other in the rain… you ever noticed how it always rains when you have to fight someone? What’s up with that?

Anyway, the music score is suitably epic too with huge, swelling orchestras and choir which means I’ll need to purchase it ASAP.

Because the film was initially in 3D there is the odd bit of obvious CG like arrows coming towards the camera but it doesn’t happen too often.

My main problem with the movie was the annoying kid who kept crying… and that’s why I’ll never have kids.

Overall, The Wrath of Vajra is well paced and with a fight scene every 2 minutes, you could do a lot worse than watching this on a Saturday night; or you could even watch it on a Sunday, go nuts.