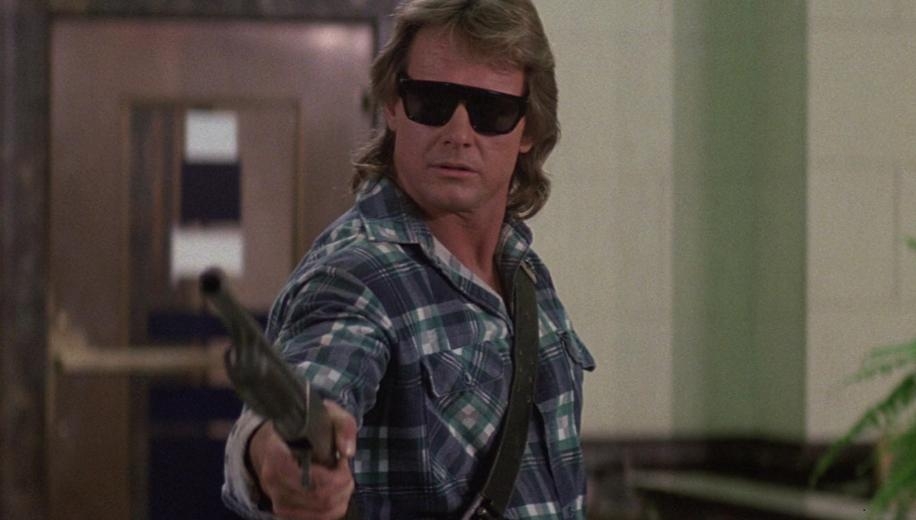 They Live really does get better with age with a likeable yet believable protagonist in Roddy Piper, a crazy storyline and a winning supporting cast that includes Keith David and Meg Foster. This Blu-ray has been stunningly remastered with near perfect picture and sound making this another must-have.

Plot: Professional WWF wrestler “Rowdy” Roddy Piper plays John Nada, a homeless, unemployed construction worker who discovers a pair of sunglasses that when worn suddenly reveal a world run by upwardly mobile, capitalist, yuppie aliens intent on keeping the human race sedate and brainwashed with subliminal messages fed through advertising and the media. Luckily for us, all John Nada wants to do now is chew gum and kick ass, and he’s all out of gum.

Review: Following on from my Studio Canal Blu-ray review of Escape From New York the other day one of the other movies I bought was another John Carpenter classic – They Live which has also been given a new restoration.

I’m not sure if I’ve ever mentioned this before but I have two favourite directors – one of them is Walter Hill and the other is John Carpenter. They may not always make perfect movies, but I always find something to enjoy and I consider them both masterful filmmakers.

This is a movie I’ve grown to appreciate more and more over the years, and it seems that now it’s even more relevant than ever with its subversive political satire. The brainwashing through television by the corporate elite was an ingenious idea and nothing much has changed except now we are being controlled by our phones instead.

“We are their cattle; we are being bred for slavery.”

They Live very much captures the anxiety and dislocation felt by the public at the time and while watching one of the many special features someone mentioned how it is essentially The Matrix for the analogue culture which is a perfect description. Our reality is being controlled by other beings (in this case aliens) and we are made to sleep through it as a signal from a satellite keeps us from finding out what they truly are.

Roddy Piper (R.I.P.) is ideally cast as the blue-collar worker Nada who is essentially homeless and looking for work; he is someone we can identify with as he has an almost naïve optimism and how he believes in America. If he works hard the right opportunity will present itself… or so he thinks. What he doesn’t expect is that he will accidentally discover that the human race is being controlled by aliens; when he puts on some special sunglasses, he sees the beings for what they really are, so he now has a purpose – destroy them at any cost.

“I have come here to chew bubblegum and kick ass… and I’m all out of bubblegum!”

Nada can’t do this on his own so he tries to recruit his friend Frank (played by Keith David); Frank wants nothing to do with it and thinks Nada is crazy so Nada tries to get Frank to wear the sunglasses so he can see the world for how it really is. Thus ensues what is arguably one of the greatest on screen punch ups of all time with Nada desperately trying to convince Frank of the reality they now face. The fight goes on forever with the two men refusing to back down but eventually Frank relents and puts on the sunglasses.

The two men join forces and decide it’s time to take out the signal and free mankind from their eternal slumber.

They Live is nihilistic stuff and is filled with dark humour and the usual great dialogue you’d expect from a Carpenter flick. The performances are spot on and Keith David is wonderfully gruff as Frank.

Carpenter does the music score with Alan Howarth and its twanging guitars are endlessly cool while also working to provide the atmosphere for this bonkers story.

It isn’t exactly packed with action and some may find the first half a little slow but it’s all building up the characters and story so for me there isn’t a single minute I would trim from the movie. 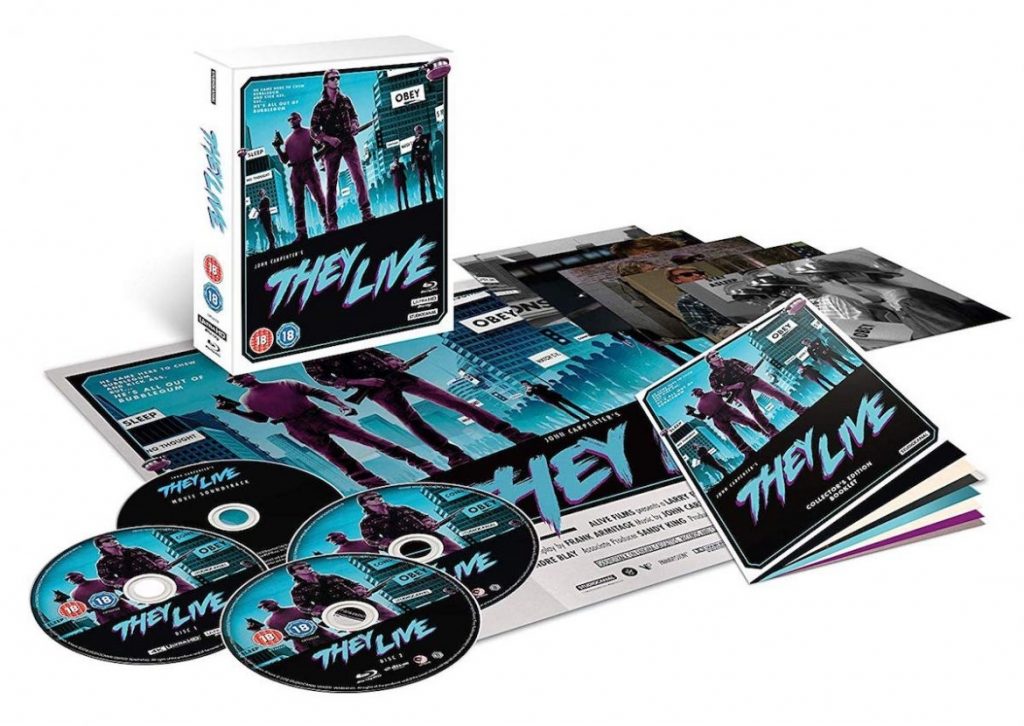 Let’s take a look at some of the special features from this fantastic Blu-ray!

As impressive as the features are on They Live I found the Escape From New York features a little more interesting as I love deleted scenes which this sadly doesn’t have.

The making of They Live goes behind the scenes of the themes of the film and talks about the the short story Eight O’clock in the Morning by Ray Nelson (1963) which inspired the movie.

The Keith David interview is fun and he talks about the amazing fight scene as well as how his theatrical training wasn’t much use for the character of Frank who is very much from the streets.

Meg Foster also makes for another enjoyable interview but I always thought Nada was a little dumb for chasing after her character Holly as she clearly looks evil. She is Evil-Lyn after all!

Overall, They Live is another Carpenter classic with themes every bit as relevant now as they were back in 1988; Roddy Piper is awesome as Nada and his banter with Frank remains massively entertaining. This Blu-ray has enough special features and it’s impressively remastered to be well worth picking up.