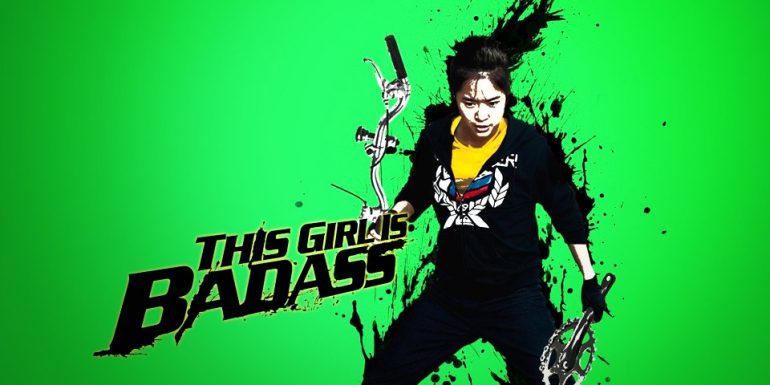 This Girl is Badass! really should be called This Film is Bollocks! but the action is excellent and holds it together, despite being one of the most bonkers movies I’ve ever seen.

Plot: Uncle Sawang and his niece Jakkalan (Mum Jokmok and Jeeja) whose lives turn into chaos after Jakkalan is hired to transport some smuggled goods to ruthless gangsters.

Review: Have you ever watched a film and by the end of the credits you are left scratching your head thinking “what the f**k did I just watch?” That was me when I watched This Girl is Badass! starring the wonderful Jeeja Yanin. Her badassery is never in question and her character Jukkalan is tough yet likeable but I definitely prefer Chocolate… in every way.

This is an out and out farce comedy where nothing is to be taken seriously. Whenever you have characters riding unicycles and villains with creepily high pitched voices…. oh and midgets boxing then you know this isn’t a standard martial arts movie. I think this would be best enjoyed after copious amounts of alcohol as it is essentially a trip to the circus with fight scenes.

I literally don’t know how to review this movie but I’ll do my best; so the fight scenes are first rate and Jeeja Yanin’s martial arts crown is safe. There are some funny moments which are so ludicrous that you just have to laugh but it really falls apart in every other way. With so many outlandish characters and a practically non-existent story I felt more bemused than anything else.

It gets points for trying something different and I always enjoy Mum Jokmok on screen but it’s just too weird for my tastes.

Overall, This Girl is Badass! really should be called This Film is Bollocks! but the action is excellent and holds it together, despite being one of the most bonkers movies I’ve ever seen.