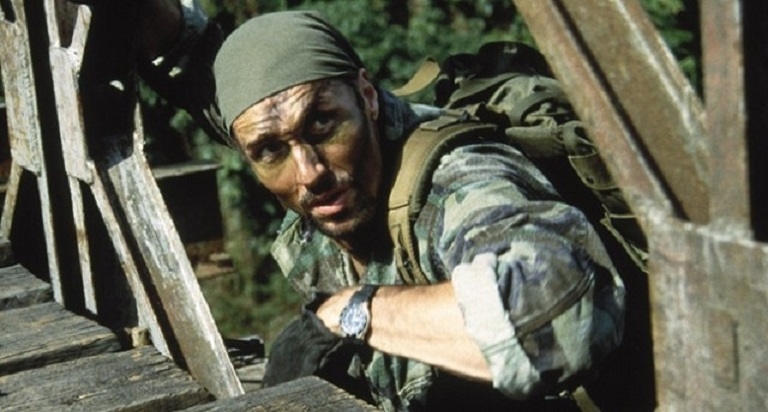 Plot: An ex-marine returns to Vietnam when he learns his former mercenary partner whom he thought was killed is being held by a sadistic general.

Continuing my Thomas Ian Griffith phase, today I thought I would revisit one of his best films – Behind Enemy Lines. This bares no relation to the Owen Wilson movie of the same name and frankly I think I prefer this as it feels like a Rambo movie with near constant action.

Clocking in at just under 90 minutes it’s tightly paced with no unnecessary scenes, but we still get enough characterization to care about our leads with Mike Weston (Griffith) proving he will do whatever it takes to bring his friend Jones (Chris Mulkey) home.

Also does anyone else always confuse Chris Mulkey with Chris Cooper? I could swear they’re brothers or something…

Anyway, it’s strange seeing Courtney Gains in an action movie as no matter how hard I try all I’ll ever see is Hans from The ‘Burbs. Mike’s crew are a likeable bunch of screw ups who won’t let him stay trapped behind enemy lines (thus the name); they could have been annoying comic relief but they are just the right side of it so you are rooting for them all to save the day.

I had to do a double take at one point towards the end whenever you see a crew member in the background which was an obvious goof but aside from that I thoroughly enjoyed this.

As I said it’s packed with action and a decent bodycount with lots of explosions and shoot-outs; I also think Griffith’s short hair looks cool.

Overall, Behind Enemy Lines is a lot of fun with Thomas Ian Griffith once again proving he’s an underrated talent; it is packed with awesome action and decent performances making this another winner for Griffith.