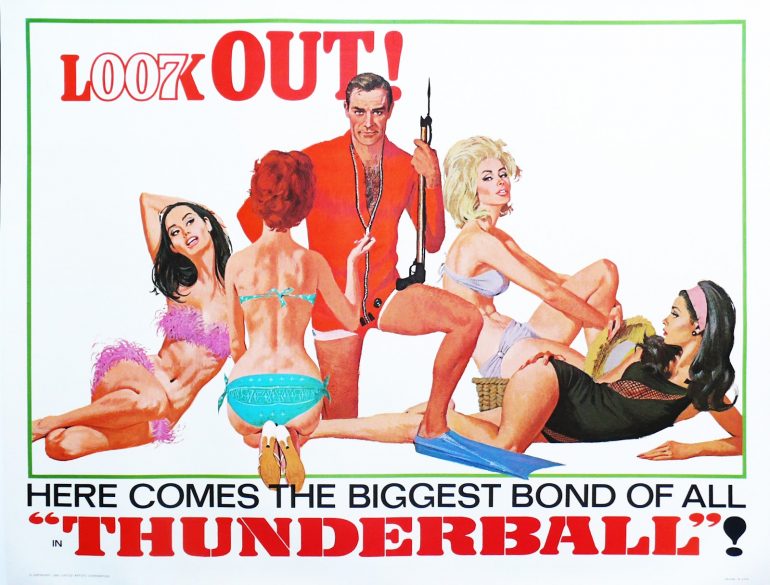 Thunderball is one of the best Bond films which is only let down by the speeding up of the action during the climax but its atmospheric score, charismatic villain and gorgeous ladies make it stand tall with the greats.

Review: Thunderball has always been up there with the very best of the James Bond films for me. Connery is on fine form and will never be bettered as 007 but this movie also has the added bonus of one of the greatest final action scenes ever.

The underwater battle is unlike anything we’ve seen before or since and has never been topped. The photography during these sequences is genuinely breathtaking and it’s all done practically too. We also get an above water fight between a warship and an armed yacht which was spectacular. It was only let down by the comically accelerated hydrofoil/yacht towards the finale which caused some unintentional mirth.

The best Bond movies are the ones featuring SPECTRE and Thunderball has some fantastic scenes; one of the opening moments is pure Austin Powers and yet still manages to be chilling with Number 1 (Blofeld) not tolerating failure.

I’ve always been a big fan of Adolfo Celi as the villain Largo who was a nasty piece of work and yet kinda cool at the same time; after all, he has a swimming pool full of sharks at his house. Pretty sure we all wish we had one of those in our back yard…

John Barry’s score is one of the best in the series which, although never using the main Bond theme during the movie, has other hummable moments which will stick with you long after watching. Tom Jones provides one of the all-time greatest Bond themes too as he belts it out over the opening credits.

Domino is one of my favourite Bond girls but so is Fiona (Luciana Paluzzi) who is a refreshingly nasty yet beautiful adversary for our trusty secret agent.

It may be a little slow in parts for some tastes but I love how it feels more like an espionage movie and there are some truly ingenious ideas like the whole stealing and camouflaging of the plane.

I just thought the story was well thought out and it never went into camp territory; although there was some funny humour they got the tone spot on.

It kept the action a little more grounded so you could actually believe (most of) what was happening which keeps you enthralled until the explosive finale.

Overall, Thunderball is one of the best Bond films which is only let down by the speeding up of the action during the climax but its atmospheric score, charismatic villain and gorgeous ladies make it stand tall with the greats.