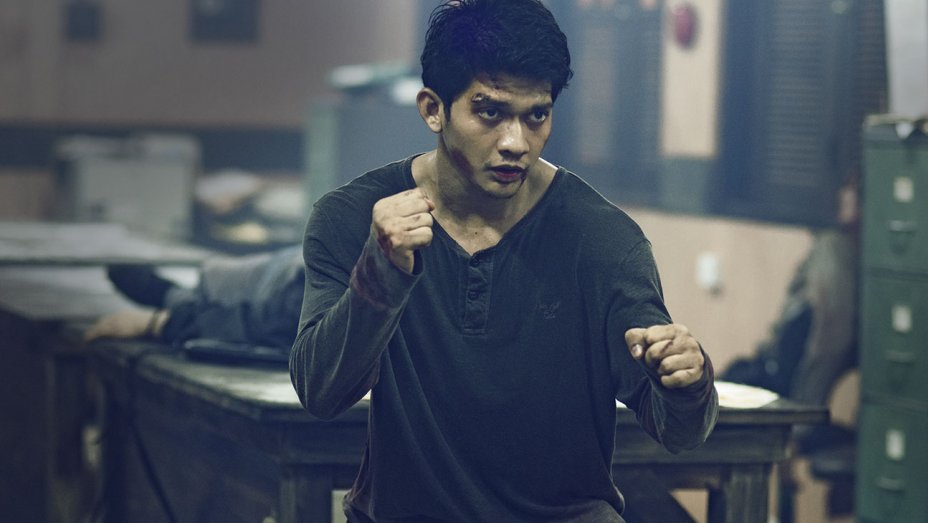 Headshot delivers in pretty much every way with bone-crunching action, an engaging story and one of the most memorable villains of the year from Sunny Pang.

Plot: A nameless man (Uwais) wakes up in a hospital with severe head trauma, not knowing who he is or what happened to him. Assisted by devoted student doctor Ailin (Chelsea Islan), who nicknames him “Ishmael” after the character in Moby Dick, he recovers and tries to regain his memory. Naturally, Ishmael’s past is about to catch up with him, in the form of Lee (Sunny Pang), a drug lord and gang boss whose tentacles reach deep into the police and the penal system. When Ailin is kidnapped and Ishmael sets out to get her back, he finds himself pitted against an array of skilled fighters who may have been his former colleagues. As Ishmael battles through a series of deadly fights with this squad of enforcers, fragments of his past are teased out and the puzzle of his identity begins to come together.

Review: The trailer for Headshot teased a blood soaked rampage of revenge and I am pleased to say that it delivered on every front. Sure the story might not be the most original but the execution is up there with The Raid movies; is it better? Not quite but it’s damn close and in Headshot we get to see a different side of action star Iko Uwais. He is a little more vulnerable than we’ve seen before and even reluctant to fight; when battling his former colleagues he holds back when maybe he shouldn’t. As you’d imagine the fights are incredible and like The Raid it spoils us for future action movies as we want Hollywood action scenes to live up to them but they rarely do.

The movie opens with a blistering prison escape and it doesn’t let up with the bloodshed; we get fights, shoot-outs, machetes and so much more so if you’re feint of heart you should probably stay away but we action fans have been crying out for a film like this. The Mo Brothers gave us the disturbing Killers recently which was more of a horror movie and Headshot is kind of a mixture of horror/action as the violence is as graphic as you would expect/want.

Despite all the killings Headshot believe it or not is a love story between “Ishmael” and his doctor Ailin but fear not, it is never boring. While he struggles to remember who he is this is also his chance for redemption as he builds up to the inevitable showdown with his former boss Lee. Speaking of Lee I thought Sunny Pang was fantastic and a part of me actually kinda liked him; he had this pleasant smile on his face a lot of the time despite the fact he’s a monster; still, I’d probably have worked for him…

The rest of the supporting cast were excellent and Chelsea Islan was very appealing as Ailian; she is a good person with genuine heart unlike Rika (Julie Estelle) who you’ll remember as Hammer Girl from The Raid 2. She has some great action scenes and although her fight with Iko isn’t quite as epic as The Raid 2 it’s got more emotion as they are former friends.

The music score was ominous and especially during the opening scene it builds up the tension nicely; it’s never intrusive but works well during all the action scenes to get the blood pumping.

Overall, Headshot delivers in pretty much every way with bone-crunching action, an engaging story and one of the most memorable villains of the year from Sunny Pang. Needless to say it’s easily the best action movie of the year.

Before you go, I just want to say that we had a Q and A with The Mo Brothers and the entire cast and I was lucky enough to get to meet Iko Uwais who was one of the nicest people you’ll ever meet. At the end of the Q and A he did a brief choreography demonstration which is something I’ll never forget so a big thank you to TIFF for such a special event.

Headshot will hit theatres in 2017.