The score to Timecop works better with the movie (obviously) but if like me you enjoy listening to music scores on their own you’ll still find plenty to enjoy as it still holds up with it’s big orchestral sound and exciting cues.

Review: I’ve always thought Mark Isham was an under appreciated composer and he has done some great scores in his time including The Mechanic (The Statham version), The Accountant, Homefront, Blade, Nowhere to Run and many more.

One of my favourites is Timecop which remains one of Jean-Claude Van Damme’s best films and although the music score isn’t a classic it works perfectly for the film. It doesn’t have a leitmotif or particularly memorable theme but I still enjoy it a lot.

The benefit of using big orchestras in your music is that the score doesn’t date so despite the movie being from 1994 it still sounds great. It’s not the type of score I’d listen to much outside of the movie but it’s exciting enough for the action scenes and the smooth saxophone for the sadder moments work in giving the film it’s beating heart.

It’s a pretty short score (thus the short review) and I wish it was longer bit of you’re a JCVD completist like me then it’s worth picking up if you can still find it. I have most of Van Damme’s scores on CD so expect various random reviews for them in the coming weeks… 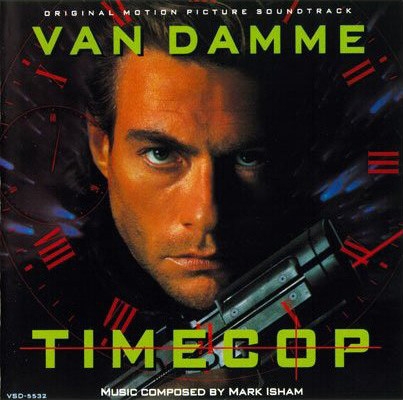