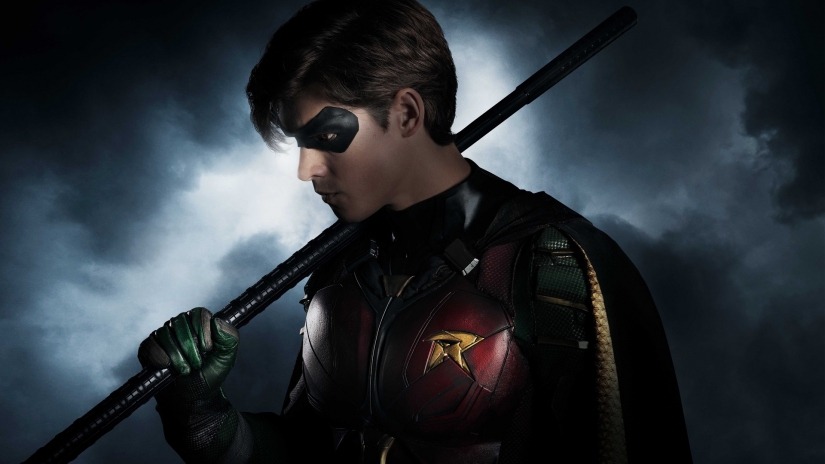 Titans is what we’ve come to expect from DC, trying desperately hard to be gritty and edgy so it will divide fans but there’s enough action and violence to keep action fans entertained.

Plot: When Dick Grayson / Robin and Rachel Roth / Raven require assistance to deal with a plot that threatens the entire planet, they join forces with Koriand’r / Starfire and Gar Logan / Beast Boy to form the Titans.

Review: I was on the fence about even watching this show as it looked like DC trying so desperately hard to be cool, gritty and edgy which is exactly what it is however, then I saw a trailer for the Batman vs. Robin episode and thought “dammit, now I’m curious and have to watch it.”

So I have literally binge watched the entire series just to see if it was worth the hype.

Before I get into it I just want to put on the record that I never understood why DC/Warner Bros. can’t just keep it all in one cinematic universe the way Marvel does. Even Agents of S.H.I.E.L.D. takes place in the same universe as the MCU movies so we at least have some continuity with characters and stories.

With DC we have the Arrowverse which features Green Arrow, Supergirl, The Flash, Superman, Legends of Tomorrow and Batwoman, and then we have the DC Cinematic Universe with Wonder Woman, Man of Steel, Aquaman, Batman V Superman and Justice League but it has zero connection to the Arrowverse. We have a different actor playing The Flash in Justice League in Ezra Miller who in my opinion is far inferior to Grant Gustin’s incredibly sympathetic version on the TV show.  We also have a different actor playing Superman in the Arrowverse which is all very confusing.

Then with this new series Titans it apparently is yet another version of the DC Universe where major characters are mentioned but never seen likely due to some kind of copyright issues or something.

It would have been so much better if we had the Arrowverse & Titans characters have several seasons to be introduced then have their own movies and all come together for an epic Justice League movie rather than the rush job we got then we could have cameos in the shows from Batfleck, Henry Cavill or Gal Gadot but I guess that would have been too expensive and require planning which is clearly something missing from Warners these days.

I went off on a bit of a rant there so what of Season 1 of Titans?

Well, the show is a darker and grittier version of DC’s Teen Titans featuring characters like Dick Grayson/Robin, Kory/Starfire, Gar/Beast Boy, Jason Todd/Also Robin, Donna Troy/Wonder Girl, Hank/Hawk, Dawn/Dove and Rachel Roth/Raven. Needless to say there are 1 or 2 characters to get to know and that’s not even including the Doom Patrol episode.

Each character does get an episode to shine though and we do get well enough acquainted with them to care what happens. I’ve heard mixed reactions from fans about the series and I can understand that; this has plenty of swearing, violence and sex which are all well and good but with characters as ridiculous as this it really doesn’t quite work when you’re clearly trying to aim it at an adult audience. The swearing especially seems forced at times and you can tell they are really trying to be edgy and it doesn’t always ring true.

Beast Boy also didn’t work for me at all and it didn’t help that when he transformed into a tiger the CG was iffy. It’s a shame as Gar played by Ryan Potter is one of the most amiable characters in the show with a pure heart.

Rachel spends the entire series trying to understand and control her powers while whining a lot… in general everyone is very broody and feels sorry for themselves, especially Robin. This isn’t the Dick Grayson from the 60’s or even 90’s Batman. No, this Robin is a bit of a psychopath who beats people nearly to death and really isn’t the character we all know. I thought Brenton Thwaites was well cast though and he certainly has the look of Robin giving him a vicious side we haven’t seen before.

Admittedly I did enjoy the violence and some of the action scenes are decent but they lack the innovation and ferocity of say, Daredevil where we had one take corridor fights which were mind blowing. There are no scenes like that in this show but it’s certainly not without its moments; Jason Todd vs. Cops was entertaining.

I particularly liked Anna Diop as Koriand’r; not only is she a statuesque beauty but she has my favourite fight scene of the show in a diner where a guy tries to punch her and instead she lifts up a fork and he is stabbed in the knuckles with it. If I was there I would have probably proposed to her right then and there.

Hawk and Dawn’s relationship is explored in one particular episode which was a rather tough watch as it deals with a pedophile character who thankfully gets what he deserves but I liked how Dawn and Hawk came together to become a great team.

I love how the show is also filmed in Toronto so I recognized practically every location which added to the entertainment factor.

The show did lose me a bit with the Doom Patrol episode with some really silly looking characters especially the robot played by Brendan Fraser. He brought some heart to it but once again it’s the 40 year old in me that I find it hard to get that involved with something so daft.

Now on to the main attraction: Batman vs. Robin… yeah, as expected it’s actually a bit of a cop out and not worth getting excited about. I won’t spoil anything but let’s just say it’s not what we expect or want. It was cool to see Batman (played by Alain Moussi) though even if it was too brief.

You can’t help but feel that it’s always teasing a bigger picture with the characters we actually want to see (Batman, Superman and Wonder Woman) but instead we are stuck purely with the sidekicks who are likable enough but never as interesting as the Justice League.

Overall, Titans is bizarrely not for the kids limiting itself to a more adult orientated audience with some graphic violence and swearing which may put some viewers off. The dark and gritty shtick is starting to get a little tiresome from DC and I’m glad we have Aquaman in theatres right now proving that it’s not all misery and that superheroes can actually be fun. I enjoyed Titans for the nonsense it is though and I’m sure comic fans will enjoy dissecting it tirelessly.