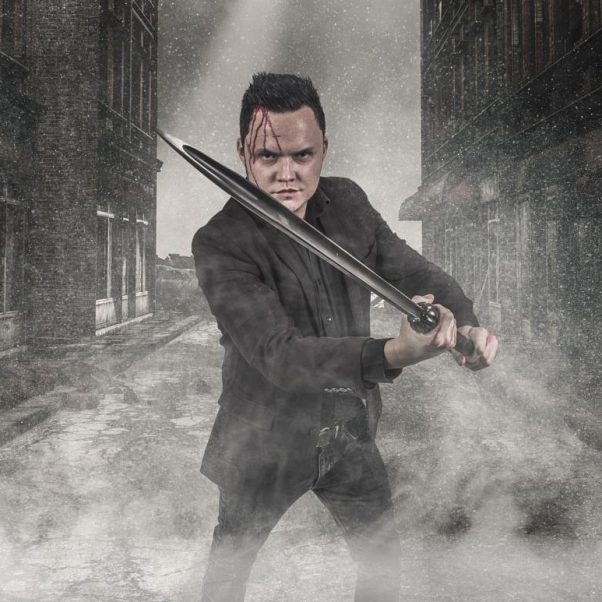 Titus Paar is the director of the recent Steven Seagal movie The Perfect Weapon which also stars Johnny Messner, Richard Tyson, Sasha Jackson and Vernon Wells. It’s a tribute to Blade Runner and the action movies from the 80-90s and is set in a not too distant future, where a totalitarian state secret government organization controls all aspects of life. All “Enemies of the State” are executed by a secret group of assassins, who go by a secret code-name which is known only by the state and a few others assigned to the same mission. The best of the assassins is a code-name “Condor” – the perfect weapon of choice. However, in his latest assignment, he fails to kill the opposition leader and finds himself on the run from the very same government agency that hired him.

Titus recently chatted with The Action Elite about the movie.

You wrote and directed the Johnny Messner/Steven Seagal picture The Perfect Weapon; how did you come up with the story?

I didn’t, the script was already written. I was pitched a few features by the same producers before this one but I really liked the backbone of Perfect Weapon. The totalitarian state and hitmen in a scif-fi world. That´s interesting stuff! But I really didn’t like the script. So I said I´ll do it if I can do whatever I want, and they said “Yes, that´s why we want you, to give us something new”

So I rewrote every scene. Added the old Japanese aspect and wanted it to be a homage to the things I liked as a kid, a homage to the 80-90s action era but at the same time create a complex story with some emotional scenes and character arcs.

I realized a serious film called The Perfect Weapon with Steven Seagal would never work or be taken seriously so It doesn’t take itself too seriously.

I added the elements of rebellion towards the state and the complex love triangle with the female lead, I like to give my audience freedom to think and use their own imagination.

You’ve mentioned previously that it is influenced by Blade Runner and movies from the 80’s and 90’s; can you tell us how they influenced the picture?

I don’t usually do American DTV action so I wanted to have fun with it. I wanted to do a mashup with everything I liked growing up and make something new and cool for the Seagal fans and the fans of charming B-action from the 80-90s. Basically every scene is layered with homages ranging from Fellini films to game references like Hitman.  Blade Runner was by far the strongest visual influence, but I also took some from Drive and Only God Forgives, so there is a lot of pop culture references all over the film. For the fan of that era and pop culture there is a lot of fun to be had spotting the references.

That´s also why I used Richard Tyson from Kindergarten Cop to get an Arnold reference. Vernon Wells has a strong Mad Max homage in there to his character Wes and I hired Peter Malota (Did all Van Damme’s films in the 90s) to do the fights and much, much more.

How long did it take to put the script together?

Fast, there was no time, so in 1 month. I also went down and worked on Seagal’s scenes with Seagal in China for a week as well. He and I wanted to do a lot of new things with him. So that he´s speaking Imperial Japanese in the film is his idea. It was very collaborative; I don´t think he does that on other films (he didn´t even know what the film he was shooting in China was about, only how much they paid him) but he liked the message of Perfect Weapon.

How much detail do you go into when putting the script together in terms of fight scenes? Do you just put “They Fight!” or describe the style of fighting?

The script I got was “They fight”. I can’t do that man, it’s just lazy. I write every punch, every kick and I storyboarded 900(!) images for this film. You can see some of them by clicking below:

Then I work with Peter and his stunt team to make the fights even better and to what we can do in the time we have, on budget and where the location is. I like teamwork and plan things into detail because when you start filming with only 19 days and not a big budget you need to know your shit and have a few backup plans in your back pocket, otherwise you won´t be able to finish the film.

Johnny Messner has been making a name for himself as the next action hero; what made him the right choice for the role of Condor?

He has that all American action star feel. He went dark in this one, made Condor a broken man. He was signed on pretty late. I had Dolph Lundgren as Condor at first and wanted to make it a Dolph vs. Seagal movie but it fell through. Then luckily WMI just got a film called Weaponized and we got Johnny through that contact. He´s got everything going for him I think to be the next action star.

It’s left open for a sequel; is that in development at all and do you have a potential story in mind?

Indeed. “The Perfect Weapon 2: THE UPRISING” where Seagal goes after the rebels off the grid, full out war. But I won´t make it; love to see someone else take a stab at it, but I’m getting A-list offers now, doesn’t make sense to make PW 2. I’m done with the B-action homages now, one was enough.

Did the final movie turn out as you hoped when you initially wrote it?

It never does; some bits are better, some bits had to go, some bits didn’t work. A lot changed when I lost 4 days of filming and had 20 min to shoot some scenes, then you can´t play around or do makeup FX or interesting camera work, then it´s just “get that part of the story in 1 or 2 takes or the film won´t work”.

This is a low budget film, full of challenges, it was never meant to be a masterpiece. It´s a fun film for a small audience.  This is the first time I did a film I didn’t write the original script to and the first time I made a movie in the US. I like the scenes in Condor’s apartment, the torture with Vernon, some of the huge action sequences are great and the scenes with Johnny and Seagal are great, some of the best acting Seagal has ever done.

Anything cut that you specifically regret?

I always said I don´t want to make films for stupid people, so I think I over-complicated this story and added a few twists I shouldn’t. A lot of people don´t understand the story or that it´s supposed to be funny. The people that do like it. I should have made it simpler and a little clearer that it´s supposed to be funny. People think I´m serious about this film, I´m not, I just didn’t want it to be a parody like Kung Fury; I wanted it to feel like it was made in the 80-90s. I also begged the company to market it more like that and have a Star Wars type poster, so that didn’t come through the way I wanted. Otherwise I´m happy with it. It doesn’t feel like just the next Seagal film, it stands out and that´s important to me.

What was the hardest scene to put together?

Seagal’s scenes, we had him for a very short amount of days and he takes his time and is very demanding so that was very hard to get all the material I needed before he was on his private jet out of there. But we did it.

You have several projects in development; can you share some details with us?

I do; Perfect Weapon has been very kind to be. I´m with Zero Gravity now, same manager as Kevin Costner and they are pushing my own films. So I´ll be making THE REFUGEES a cool Action/Adventure, a mix of Apocalypse Now and The Beach with a strong message. And My Dark Fantasy Adventure LEGEND OF DARK RIDER which is Game of Thrones meet Conan. They will both come out within 3 years, both big budget Theatrical films with A-list stars.

All I can tell you at this time, but you´ll see…

Thanks very much for taking the time to chat with us.

Thank you, there are many fun reviews that really butches Perfect Weapon out there. I love them, they are funny, I like when they get creative about it.

But also fun to read the Seagal fans and people who liked the film. I´m glad it´s doing so well financially and that the people that it was made for like it.

We´ll auction out Steven Seagal’s Sword from the film that he uses in the last, already classic Seagal scene (No spoilers) Seagal actually designed it himself and brought it to set.

And Johnny Messner’s armour suit that he uses throughout the film.

Some lucky fans will get to own them, money will be to develop new films, more on that soon.

Thank you for having me.