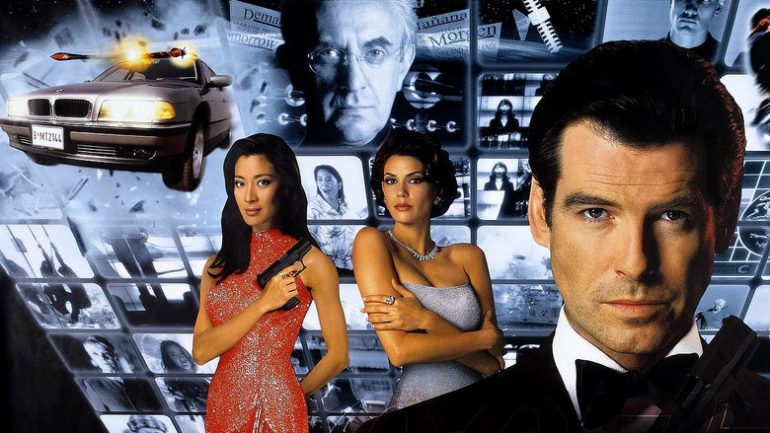 Tomorrow Never Dies doesn’t bring anything new to Bond but the score by David Arnold, a cool villain and some choice one-liners make it a really fun movie and it’s possibly my favourite Brosnan 007 movie.

Plot: James Bond heads to stop a media mogul’s plan to induce war between China and the UK in order to obtain exclusive global media coverage.

Review: This is the last Pierce Brosnan Bond movie for me to review and it’s the one I saw the most in the cinema. I think I actually went to see it 4 times, which I know is sad but what can I say, I’m a Bond fan. Tomorrow Never Dies has one of the all time great Bond scores by David Arnold in his first role as Bond composer. It mixes pop sounds with orchestra and is still awesome to this day.

Alas the same cannot be said for the theme which has the honour of being the all time worst Bond theme; Sheryl Crow does not have a note in her head and wails her way through the song, which is a shame because the visuals in the opening sequence are rather cool.

Jonathan Pryce is fantastic as the old-school villain with a modern agenda; he’s a media mogul who likes to create the news… by pretty much starting wars. He has some choice lines including “there should be enough time for Mr. Bond to watch his heart stop beating”.

Pierce is great as always as Bond, bringing his easygoing charm to the role but also the casual ruthlessness too. “I am just a professional doing a job” BANG! “So am I”. Great scene and Brosnan nails it perfectly.

The Bond girls are nice enough and Michelle Yeoh kicks plenty of ass but they are strangely forgettable. I miss the funny names they used to have.

The one thing about the movie though is that you know exactly the way the story will go; oh there’s the henchman, therefore Bond will fight him at the end and it is all rather formulaic. But that is Bond and it’s just the way we like it.

I do enjoy the opening scene with the missile flying through the mountains, it looks fantastic and there are plenty of awesome ‘splosions too. There is some great action in the movie including an insane car chase with Bond’s rather snazzy BMW.

Overall, Tomorrow Never Dies doesn’t bring anything new to Bond but the score by David Arnold, a cool villain and some choice one-liners make it a really fun movie and it’s possibly my favourite Brosnan 007 movie.