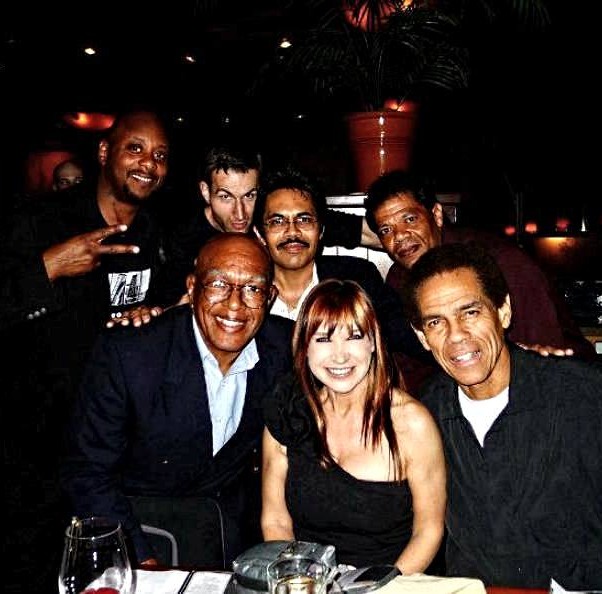 Tony De Leon has been working in the movie industry for several decades as a director, producer, writer, actor stunt coordinator & fight choreographer.

He has worked on such movies as Bad Boys, True Lies, The Specialist, Only the Strong and many more.

Tony kindly stopped by The Action Elite to talk about his career and his new project entitled Trigger Reaction.

Thank you for taking the time to chat with The Action Elite.

Before commencing our interview I would like to thank you in advance for the opportunity and privilege. It is truly an honor to be interviewed by this vibrant, electrifying and dynamic website. It’s completely AWESOME… Congratulations!!! 🙂

1) You’re a fifth-degree black belt and started martial arts training at an early age; what made you want to be a stunt coordinator and is there anyone you’d consider an inspiration?

A) Thank you for the acknowledgment; yes I am a fifth-degree black belt in the Martial Arts system Tada Ken Do, and I did start Martial Arts training at an early age. In addition I am a director, producer, writer, actor, and stunt coordinator & fight choreographer. I have worked in Hollywood blockbuster films like “Bad Boys”, “True Lies”, “The Substitute”, “Instinct”, “The Crew”, “To Kill a Killer” and “Let’s go to Prison”.

B) I never wanted to be a Stunt Coordinator, but rather an Action Packed Actor. None the less I am grateful to God for the blessing. In regards to my inspiration, it has always been Bruce Lee.

2) How did you get your first break into movies?

My first break into the film industry was while vacationing in South Beach, Florida. At the Hotel that I was staying they were filming back then one of the “Miami Vice” television episodes. I was spotted by the directors and made an offer. I did accept and the rest is history from there on.

3) You’ve worked in the movie industry for several years now and done your fair share of stunt work; has the development of technology made your job easier or harder?

Yes, I have worked in the movie industry for some time now, and the development throughout the years to some extent has been for the better, for other extent Computer Graphics Imaging (CGI) has taken over some of the most extreme dangerous stunts. In some cases it makes the job easier and better, but in other cases it makes it more complicated. It all depends on what the scene calls for. That is the bottom line.

4) Can you tell us about Trigger Reaction which you wrote, and are in the process of producing it?

Ripped out of today’s headlines, “Trigger Reaction” is deeply rich in character and emotion, seamlessly mixing current events with kick ass driven action, explosions and adventure. It’s the story of two detectives from Chicago, who think they are going to break up a drug smuggling ring, but soon find it is something far more insidious — organ trafficking. Caught off guard, they are shot and left for dead, but one of them lives, for a while in a coma. He has partial amnesia when he comes out of the coma, but the criminal conspiracy of organ trafficking isn’t going to wait and see if he recovers enough memory to be a threat, so he is “marked” for death by the head of the organization.

5) How did you come up with the story, and how did Cynthia Rothrock get involved?

A) That’s a great question and one that I continue to get all the time. The idea for the movie came up from an experience that I had a while ago in a routine check-up at a Hospital. The Doctors ran me through every possible test that the insurance would cover, including Electrocardiogram (EKG). I noticed that there was some kind of commotion going on concerning my EKG results, so a second one was performed with several student Doctors attending it. I felt uncomfortable but kept my cool, not knowing what the fuss was all about? After the test was conducted, the Doctors came to see me with the final results. They congratulated me and said that I had a very powerful heart. They were all impressed to see just how healthy my heart was. One of the Doctors went as far to even asks me if I was an Organ Donor.

I was surprised to hear that kind of question to say the very least. However, it was not the question that puzzled me but rather the intentions behind it. You’ve heard the expression; that is not what a person asks, but rather how it was asked. That type of thing, and it did trigger a reaction in me. I started to investigate the black market of organ trafficking, and after discovering just how real it was, and that perhaps I was a potential target, I decided to write an Action Cop thriller based upon my experience at the hospital. I called it “Trigger Reaction“. That’s how the Plot for the script was born.

B) Cynthia Rothrock (Lady Dragon) was contacted by my partner Mr. Pavel Nyziak. He offered her a role and she gladly accepted. We also had the rare privilege of meeting with her at a Martial Arts event at Los Gatos, California in 2012. She is really Fantastic, Charismatic and dynamic. I am so glad that she accepted without any hesitation.

6) What are you most excited about with this movie?

THE BUZZ that the fans have created!

Trigger Reaction has a following of fans throughout the world. They have gone through great lengths of their time and devotion and have even made their own teaser trailer of “Trigger Reaction”. OF COURSE IT’S THEIR own interpretation of what the movie will be like based upon our Cast. In actuality we are far from their vision since our plot is a Cop Action Thriller movie, and Not a Martial Arts one. We can be compared to the likes of “The Bourne Identity”, “Taken” & “The Fast & Furious”.

According to some of the Press reviews; the film is destined to be a smashing hit, no doubt about it! They continue to compare us with “The Expendables”. They are predicting that we will be the next “Expendables”. Awesome comparison!

7) Any word on a release date?

At the present time we have pending offers from several distribution studios. So we are exploiting the available options to the best deal as in any other business. The possibilities are definitely out there, and we will have an announcement in the present future. Thank God!

8) You worked with Arnold Scharzenegger on True Lies; did you get to spend any time with him and did he give you any tips for the industry?

A) Working with Arnold was an AWESOME experience for me personally. He is truly a big Teddy Bear! The time that I spent doing the scenes in “True Lies” are cheerful and memorable. The most interesting moment for me was when Arnold put me on one of his workout routines for my knee. I had knee surgery about 4 months before commencing to shoot “True Lies”. I explained that to Arnold and he did not waste any time or hesitate to show me some of his work-outs to strengthen it quicker, and believe me… It worked! The Man is a fitness walking encyclopedia!!!

B) Concerning the industry aspect, I have always maintained a disciplinary quote; No questions asked, do your job and move on. If they are content with my performance, they will call me back. So far it has worked just fine, Thank God! However, I would really enjoy working with the Great One (Arnold) if the opportunity presented itself.

9) You’ve worked on low budget movies and big budget blockbusters; do you find one easier than the other or do both have their share of challenges?

It all depends on which side of the camera you are working on. If you are behind the scenes as a Producer, Director or Crew then pressure is probably the same. Each production has its own challenge; on the big budget films the crew is huge compared to the low budget films, and the atmosphere is way more professional and demanding. On the flip side of the coin, the shooting hours are longer and more exhausting. On the low budget of films a person can get more authority since he or she are wearing more than just one hat, meaning they have more than one type of job to do. So it becomes stressful at times if you don’t have your game plan in order.

10) What advice would you give to newcomers who want to become stuntmen?

My advice for the new comer is to polish up their acts, and believe me that they are just doing that! The talent that is out there is incredible, fantastic and brilliant. They are taking the film industry to the next level. We are seeing it every day, how they’re changing the way that we look at films. Anything is possible when one believes in oneself, and is ready to pay the price to go after their dreams.

11) What other projects do you have in the pipeline?

I have several projects still pending in the pipeline, and there will be future announcements as they develop. I will take them one at a time with the Lord’s blessing!

For the time being, please visit us at our “Trigger Reaction” website for the all the latest development: www.triggerreactionmovie.com

Thank you once again for taking the time to talk with us and all the best with Trigger Reaction.

Thank you for the interview and the support, best regards!