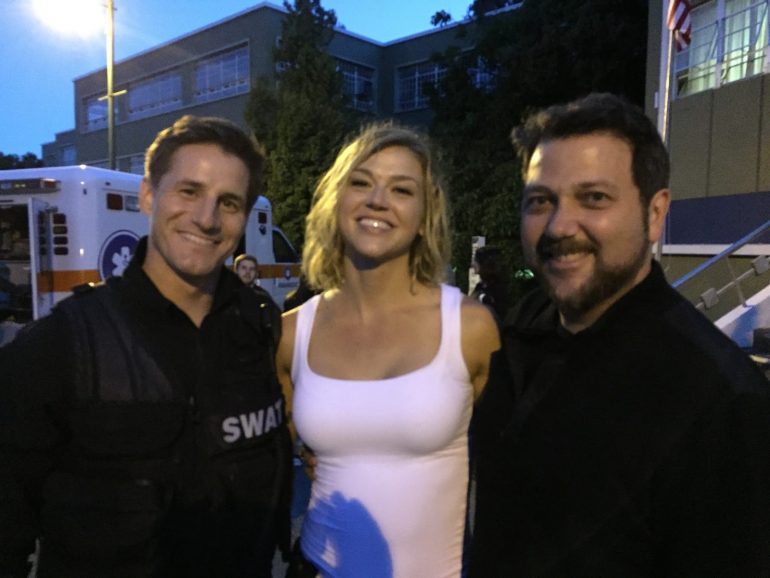 SYNOPSIS: When a D.E.A. and S.W.A.T. cartel takedown ends in a shootout, S.W.A.T. Agent Travis Hall (Jaeger) seizes a mysterious prisoner and takes him into custody. Before long, the S.W.A.T. compound is under siege by wave after wave of assault teams attempting to recover the prisoner known as “The Scorpion” for the tattoo emblazoned across his back. When Travis discovers that his prisoner is a black ops specialist with the goods on both U.S. intelligence agencies and international criminals, it’s up to Travis and the expert S.W.A.T. team to keep The Scorpion and his billion-dollar secrets safe.

Tony chats with The Action Elite about the movie.

Your new movie S.W.A.T.: UNDER SIEGE will be out August 1; what was it about the script that appealed?

I’m the absolute worst reading someone else’s script. It takes me a few times to truly understand the story and to differentiate the characters, but I was told this was fast-tracked and they needed a quick read. I got sent the script on a Friday and my meeting with the Producers at Original Film was on Monday.

The script felt like this wonderful modern, homage to ASSAULT ON PRECINCT 13. Not exactly, but the elements were there. And being a John Carpenter fan, I was immediately interested. I liked the idea that the good guys were ‘trapped’ in their own place, a place that is supposed to be safe. I then saw the potential to add some layers.

Talk a little about the excellent cast; were any of them already attached when you came on board to direct?

None of them were attached prior. The cast was amazing, not simply on film, but personally as well.

I first became aware of Sam Jaeger through his TV work. He and I are both represented by the same management company. For HALL, we wanted someone who wasn’t known for his action work. And while Sam has action credits, he’s best known for his dramatic work. He felt like the every man. So often times in action films, the lead guy looks like he’s a Comic Book Superhero character. We didn’t want that. We wanted someone ‘real’. Sam captured that. And he enjoyed the action, especially all the fights. He went home tired every night, that’s for sure. And talk about dedicated… his wife had just given birth to a new baby, so he would work Monday-Friday with us, fly home Friday night, be with his family and then fly back to us (in Vancouver) Sunday night. I’m guessing he got about an hour a sleep/week.

I have been wanting to work with Adrianne Palicki since I first saw her in FRIDAY NIGHT LIGHTS. She’s since gone on to have such an amazing, diverse career. Action, drama, comedy, she literally does it all. There are very few actors on the planet that can do what she does, which includes all her own fights and stunts. Adrianne literally can seduce you with a look and then kick your ass. I wrote this long email about how much I wanted Adrianne for the part. What I wanted from her character, how I was going to shoot the film, etc. and a good friend of mine who had worked with Adrianne was kind enough to forward it to her. About a week later I got an email from Adrianne asking if she could call me. Less than 30 seconds into the call, it felt like we’d known each other for years and I knew she was in.

Matthew Marsden is an actor I first became aware of through my friendship with Paul W.S. Anderson. When SWAT needed a charming villain who could be a foil to Michael Jai White, I instantly thought of Matthew. He’s not simply a great actor, but he’s held his own in great action films like BLACK HAWK DOWN, JOHN RAMBO & TRANSFORMERS.

And for Matthew’s right hand, I was incredibly excited to work with Monique Ganderton. Monique is a special talent. Already known as one of the world’s top stunt performers, she’s moving flawlessly into acting. There’s literally no one else I wanted to play this part. Fans will be talking about Adrianne and Monique’s fight scene after this one. And I’ll save you the trouble now: You’re welcome.

For all the cast, I got supremely lucky.

This was the first film I shot in Vancouver since CHAOS (my Jason Statham, Ryan Phillipe cop film) and I was fortunate enough to round up some of the actors from that film who I knew well and I knew would deliver for me. Ty Olsson (War for the Planets of the Apes, X2), Mike Dopud (X-Men Days of Future Past), Pascale Hutton and Garvin Cross.

Michael Jai White is one of my favourite actors; why was he the right choice for this movie?

The character of SCORPION is a larger than life, mystery figure who can take you apart both physically and mentally. I found Michael to perfectly fit that. We all know how amazing a martial artist/fighter he is, but he doesn’t get enough credit for his dramatic chops. All his scenes in THE DARK KNIGHT were opposite HEATH LEDGER, who won an Oscar for that part. Michael’s also very funny (see BLACK DYNAMITE).

What can we expect from the movie in terms of action?

If you are tired of cartoon VFX heavy action scenes this is the film for you. Not only did our budget not allow it, but even if I had a big budget, I wouldn’t do that. I hate this trend where everything is shot against green screen and VFX dominates. VFX, in my opinion, is being used incorrectly these days. VFX are supposed to compliment the action/story, not vice-versa.

We put all our actors in harm’s way. Safely of course. They ALL did their own fights and stunts. When you see Sam Jaeger wince in pain when someone throws him over their shoulder and slam him to the ground – that’s a real wince.

The action scenes are plentiful, with the entire 3rd Act being one long insane ride. We have 3 major gun battles, a botched escape, some explosions, and so many fight scenes I can’t even count them – and I directed the film.

This was a film shot in 21 days. No reshoots. No 2nd Unit. Our cast, stunt team, and crew deserve a ton of credit. I realize there are challenges to every film, but on bigger films, they can rehearse a fight for several days, if not weeks. They get 2-3 days to then shoot the fight. Low budget shows, you’re lucky to get 1 rehearsal in. Most times the rehearsal comes the day of the fight. You’ll then have 3-4 hours to shoot the entire fight. But unlike big film’s where the actor gets to go home for the rest of the day, my actors have to keep acting, trying to hide and bumps, bruises and pains they may have for the remaining 8 or so hours. And forget about time off to recoup, they have another fight or action scene usually the next day.

How challenging is it to come up with action scenes that are fresh?

It’s a challenge, but I don’t think of it like that. I also don’t see it as ONLY my job. I’m not the one who has to jump up, spin and high kick a guy. I talk with my actors, feel them out on what they can and can’t do. Then I meet with the Stunt/Fight coordinator. I relay that information and I ask them to come up with something exciting that works in the scene. We then bring in the DP. It’s a team effort, with me steering the ship.

First and foremost, to me, is telling the story. Each fight and or action scene needs to progress the story/character forward. And I believe if you start there, make THAT the priority, then the originality will come organically. We’ve all seen cool, action scenes, but if the film stinks or the scene feels misplaced, it won’t be remembered.

What do you think are key ingredients to a great action flick?

Characters. You have to care what’s happening to them. If you don’t care if they live or die, win or lose, then the emotion is lost and the movie doesn’t work. At that point, who cares how cool the action is?

Story. No one wants to spend 90+ minutes and get to the end and have the story not make sense.

These are not simply vital to action films, but all films.

Having a vision. My job as director is to get EVERYONE on the same page, cast & crew. If everyone is on board, thinking the same way, then THAT’S when you get the best and most organic action.

All the other stuff is secondary.

I want them to have a good time. This should be an entertaining 90 minutes. I do think there’s a positive message to extract. About family and loyalty. About assessing what’s important in life or what should be important.

It’s subtle and if the studio knew it was in there they would’ve cut it, but it’s in there. 🙂

Would you be interested in another entry in the series?

The real question will be is if people want me back for another entry. I can be a handful. But seriously, I’m always interested in great material and working with outstanding people.

You were working on a 4th Death Race; how is that coming along?

DEATH RACE: BEYOND ANARCHY is complete and set for release in January 2018 (exact day TBD). It’s GREAT! I’m not just saying that. I really enjoyed it. Don Michael Paul crushed it. The cast is great and the action is awesome. They really went all out for it. I can’t wait for the fans to see it. And see the unrated version. You will NOT be disappointed. I love this franchise, but this was the first time I feel we’ve finally made our OWN film in this series. This film takes place AFTER the events of 2008’S DEATH RACE (directed by Paul Anderson, starring Jason Statham). We were no longer restricted in our story-telling. The other 2 films I wrote were prequels. We didn’t have free reign to do anything we wanted. This film, we got to go mental.

Thanks very much and we look forward to seeing S.W.A.T.: UNDER SIEGE in August.

Always a pleasure. I’m probably a week away from announcing 2 great new projects, both of which your readers will be excited about.