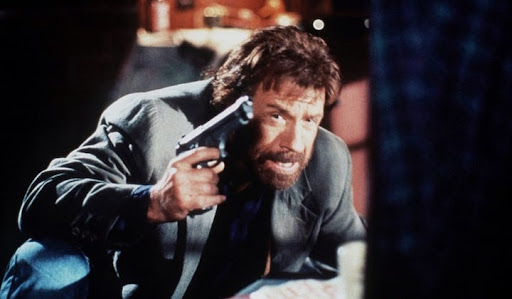 Top Dog is as bad as you’d expect but it is still a guilty fun time with some surprisingly impressive action scenes and a fast pace. Hey, at least the dog doesn’t speak…

Plot: When terrorists threaten to blow up San Diego, heroic cop Norris is forced to collaborate with a canine partner who seems to outsmart him every step of the way.

Review: After watching the incredible Flight of Fury the other day I thought I would watch another classic – Top Dog starring the one and only Chuck Norris. Believe it or not this is another movie I had never seen until recently as it always looked awful. It is… and yet I still enjoyed elements of it.

There is plenty of action with some awesome explosions and Chuck Norris kicking and punching lots of people in the face. The dog Reno needs a serious bath but he had more acting ability than Chuck; seriously he really is a terrible actor matched only by Seagal in terms of displaying zero emotion.

There were so many of these kinds of movies during this time period like Turner & Hooch or K-9 where a cop is reluctantly teamed up with a dog to sniff out the bad guys. I’m still waiting for Blue’s Detective Agency featuring the Velociraptor from Jurassic World solving crimes with Chris Pratt.

Top Dog is blissfully short running under 90 minutes and it is surprisingly well paced but where it falls down is when you question who is the target audience for the movie. Is it for kids? I mean, the villains are Neo Nazi White Supremacists who are planning a terrorist attack and it’s quite violent at times so it’s hardly one for the youngsters. The humour and script are rather juvenile so it isn’t really for adults either; I guess it’s for people who like watching dogs be cute although Reno isn’t a particularly appealing animal. He chews people’s clothes and is rather badly behaved so I didn’t find myself rooting for him in any way.

Does Chuck Norris think that living in a dirty pigsty of a house makes him more manly? Not just in this movie but you’ll remember his house in Lone Wolf McQuade which was also a bit of a shithole. There is nothing wrong with living in a clean house, Chuck!

Why am I still talking about this movie?

Overall, Top Dog was mildly better than I expected in terms of action set-pieces but Reno the dog wasn’t especially likeable and Chuck’s acting was horrible; I’m not going to pretend this is a good film as it isn’t but watch inebriated or stoned for maximum enjoyment.