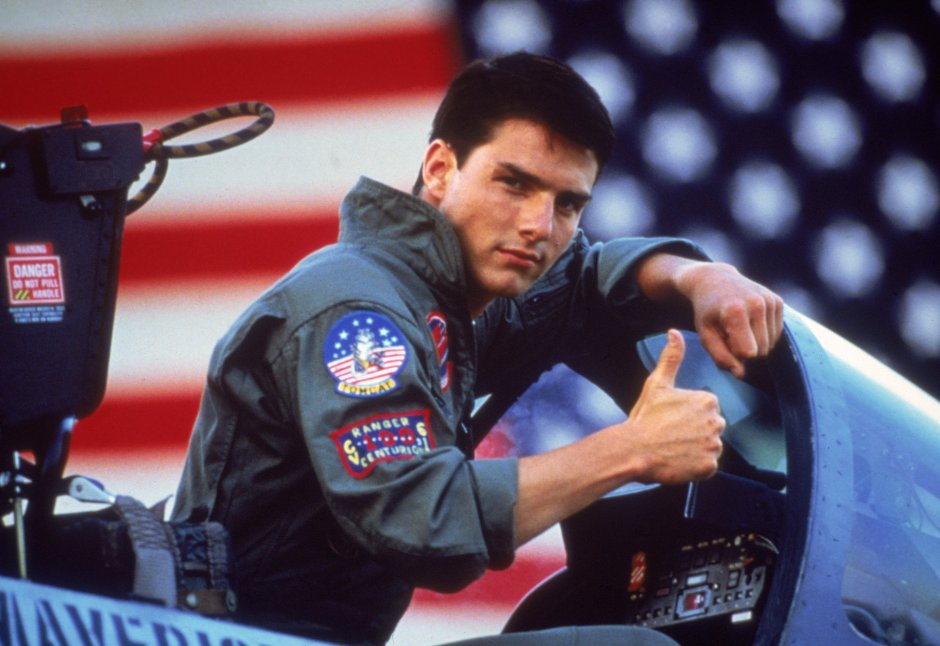 Top Gun is essential viewing and will be one of Tom Cruise’s most iconic film long after he is gone.

Plot: The Top Gun Naval Fighter Weapons School is where the best of the best train to refine their elite flying skills. When hotshot fighter pilot Maverick (Tom Cruise) is sent to the school, his reckless attitude and cocky demeanor put him at odds with the other pilots, especially the cool and collected Iceman (Val Kilmer). But Maverick isn’t only competing to be the top fighter pilot, he’s also fighting for the attention of his beautiful flight instructor, Charlotte Blackwood (Kelly McGillis).

Review: Widely regarded as Tony Scott’s most iconic film, it’s not difficult to see why. The aerial photography is fantastic but the action on the ground is equally as interesting. As always the use of light is fabulous in so many scenes; there are plenty of silhouettes in front of sunsets and it’s easy to see where Michael Bay ripped off his visual style from.

Tom Cruise plays Maverick, a frankly unlikable, arrogant ass who is more interested in telling people how great he is rather than doing anything useful… and yet, you still don’t hate him.

It’s no wonder this film is so popular; Tom Cruise is great as Maverick because despite him being a bit of a prat, he of course learns to play as part of a team, but there are moments beforehand where he shows a good side to his personality. Helping Cougar land his plane after he has a mid-air panic attack is one of them. His bravado is all for show however, as Maverick feels like he is living in the shadow of his father who was a great pilot but also had a reputation for being reckless.

Is Val Kilmer meant to be a bad guy in it? I see him more as the voice of reason and a counter balance to Maverick’s self love.

The supporting cast are all great including Michael Ironside, Tom Skerritt, Anthony Edwards, Val Kilmer and Meg Ryan. Like I said before, Kilmer’s character “Iceman” is a far more likable character than Maverick. Anthony Edward’s “Goose” is literally Maverick’s Wing-man and the two play off each other perfectly. When Goose is killed in a mid-air crash, Maverick is devastated and has to face some hard truths about himself.

The scene where Maverick sings “You’ve Lost That Loving Feeling” to Kelly McGillis is toe-curlingly embarrassing and I have to skip it any time I watch it. McGillis is extremely likable and she can clearly see through Maverick’s bravado.

The music, although kinda dated now is still awesome; Mighty Wings, Take My Breath Away and Danger Zone are the best kind of 80’s music. When I was in in the Grand Canyon last year the helicopter pilot put on some music and while we were flying through the canyons, she stuck on Danger Zone. I nearly wept with joy; the song is pure adrenaline.

Harold Faltermeyer’s score is arguably the best he’s ever done; that main theme still gives me chills. Any theme with electric guitar works for me every time and this is one of the all-time greats.

Admittedly some of it is extremely dated and cheesy now but it’s not like there’s been any other “plane” movies that have even come close to it’s visual style, music and characters. I was really looking forward to seeing what Tony Scott was planning to do with the sequel but sadly it looks like it will never be.

Overall, Top Gun is essential viewing and will be one of Tom Cruise’s most iconic film long after he is gone.