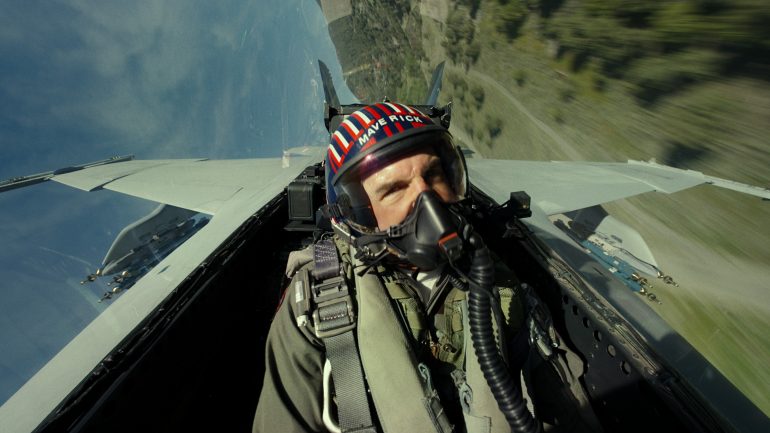 I haven’t enjoyed a trip to the cinema this much for a long time and Top Gun: Maverick is a near perfect blockbuster with heart, an engaging story and some spectacular action scenes. Believe the hype; it’s worth the wait.

Plot: After more than 30 years of service as one of the Navy’s top aviators, Pete “Maverick” Mitchell is where he belongs, pushing the envelope as a courageous test pilot and dodging the advancement in rank that would ground him. Training a detachment of graduates for a special assignment, Maverick must confront the ghosts of his past and his deepest fears, culminating in a mission that demands the ultimate sacrifice from those who choose to fly it.

Review: As blasphemous as this may be for some I never quite loved the original Top Gun as much as everyone else; I enjoyed the music, the dogfights and the supporting cast of characters but Maverick (Tom Cruise) was so arrogant and obnoxious I wanted to punch him in the face for a lot of the film.

I rewatched Top Gun last night to have a refresher before viewing the new film Maverick tonight and I must admit I have never enjoyed it more; maybe because I’m older I appreciated things like Maverick’s character arc and the endlessly quotable dialogue but it really got me excited for this belated sequel.

My main fear for Top Gun: Maverick was that it was just going to be a simple nostalgia trip and basically be a rehash of the original film; although it maintains the same musical themes and the opening sequence is practically identical this feels like a genuine sequel where the character of Maverick is older, more world weary and still struggling to find his place in the world.

Gone is his youthful arrogance and although he is still recognisable, I prefer this iteration as he feels more relatable and human. After several decades since the events of the first film Pete “Maverick” Mitchell is a highly decorated pilot but is still a wildcard that should be a higher rank than Captain at this stage of his career.

He is asked to return to Top Gun to train a new batch of pilots and undergo a dangerous mission behind enemy lines. One of the new recruits known as Rooster (Miles Teller) just happens to be the son of Maverick’s friend Goose who (spoiler alert) as we all know was killed in the first film. He has an attitude towards Maverick which I won’t go into here as I don’t want to spoil the story but it’s their relationship which is one of the main drivers of the film.

As entertaining as the first Top Gun is it could be argued that this sequel has more heart and there were several moments where tears of manliness may have been shed. The scene between Maverick and Iceman (Val Kilmer) is one of the many highlights but also reminds us what a great actor Cruise is; he may be known for doing some of the craziest stunts ever put on film but he also gives one of his best performances here and it’s a genuinely emotional and uplifting tale the like of which we rarely see these days.

There isn’t a bad performance in the entire film and I found myself genuinely rooting for the new generation with Miles Teller being especially sympathetic as Rooster. I surprisingly loved Glen Powell as Hangman who is essentially this film’s version of Iceman bringing the right amount of cockiness to the role.

It’s the third act of Maverick where the film really transcends to become one of the best blockbusters of recent times with mind-blowing aerial photography and an adrenaline fuelled finale. There are some spectacular explosions and minimal visual effects so there isn’t much for action fans to complain about.

In terms of flaws if I were to nitpick one could say the first half is a little slow and the film’s script may not be quite as quotable but there are still some great lines, and we shall see over the coming years if it is looked at as fondly as the original film.

The music is perfect (featuring Hans Zimmer) with the iconic theme making a triumphant return and even Lady GaGa’s song isn’t awful; it’s no “Take My Breath Away” but it works just fine and there are some other fantastic tunes too.

Overall, Top Gun: Maverick is a perfect example of how to do a sequel right with memorable characters, stunning aerial dogfights and an emotional core that will give you a big goofy grin by the time the end credits roll.