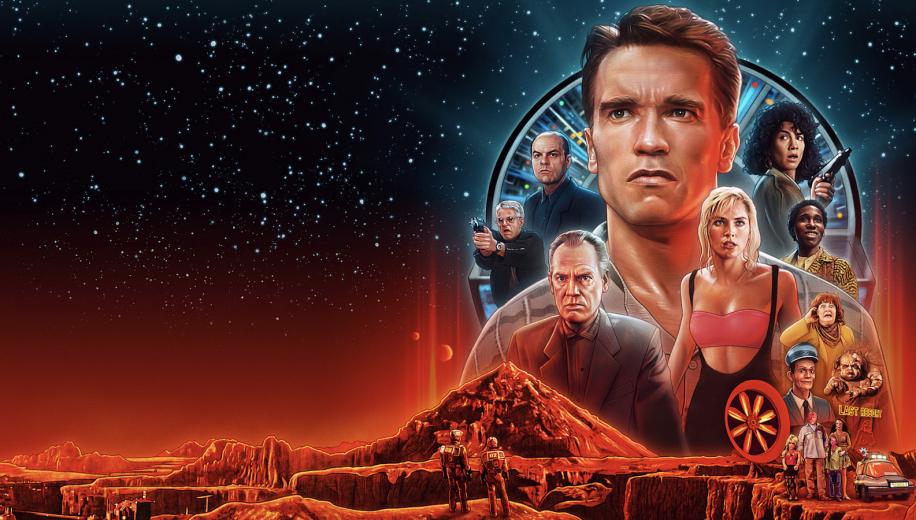 We all know Total Recall is one of Arnold Schwarzenegger’s finest hours and this 4K release is a worthy upgrade with first rate picture and sound and a plethora of special features to keep you glued to the screen for hours.

Plot: When a man goes for virtual vacation memories of the planet Mars, an unexpected and harrowing series of events forces him to go to the planet for real, or does he?

Review: Total Recall is a sci-fi classic by the masterful Paul Verhoeven and for me it’s easily in the top 5 Arnold Schwarzenegger films. It has a genuinely mind-bending story and plenty of over the top violence as well as exploring class systems so this was quite different from your average Arnold movie.

I recently picked up the 4K Blu-ray and I’d heard a few reviews say this 4K release was a disappointment but it looked and sounded just fine to me; as I don’t have a full home cinema set up then maybe I’m not getting the full effect. One thing I’ve noticed with the 4K releases I’ve been getting lately is that I haven’t needed to use the subtitles as the vocal tracks just seem so much clearer.

Total Recall was a short story originally written by Philip K. Dick entitled “We Can Remember It for You Wholesale” and was actually quite different from the movie; it didn’t even involve Mars with the protagonist meant to be a more mousy character. Richard Dreyfuss was a favourite to play Quaid initially but it was agreed that Arnold would be a bigger box office draw and they weren’t wrong. It would go on to be a smash hit and is widely regarded as one of Schwarzenegger’s best films.

Jerry Goldsmith’s music score is as iconic now as it was then remaining one of the all-time great movie scores with the opening credits theme one of the most masculine sounding pieces of music you’ll ever hear. This release pays tribute to the late, great composer and his works on this movie as well as some of his other classic scores. I hope someday we get a return of these kinds of themes in action movies as it was such an integral part of what made them so memorable.

Total Recall is packed with hard R action, Arnold delivering classic one-liners and still impressive special effects (mostly); there are a few visuals which don’t hold up so well but it is over 30 years old and is obviously going to happen.

Verhoeven’s excessive violence was one of the many high points of RoboCop and Total Recall doesn’t shy away either. There are some hilarious bone crunching sound effects as Douglas Quaid breaks necks trying to find answers and this film has a huge bodycount, including innocent civilians who foolishly get in the way of stray bullets.

The scenes on Mars still look great and the set design is fantastic; I love the concept of the Johnny Cab too (voiced by Robert Picardo).

Rachel Ticotin was always great at playing the tough but vulnerable female; as Melina, she really is one of my favourite action heroines who is believable and an ass-kicker at the same time. Her fight with Sharon Stone pulls no punches and is one of the best beatdowns in the movie.

Speaking of Sharon Stone, she was perfectly cast as Quaid’s wife Lori with her icy gaze making her look genuinely crazed.

Ronny Cox (a Verhoeven regular) has some choice lines as the villainous Cohagen who’s the administrator of Mars and even charges people for air. He spends most of the movie telling off his  henchman Richter (Michael Ironside) who keeps screwing up and letting Quaid get away. This is maybe Michael Ironside’s best character coming off as intimidating and frustrated in equal measure. I love the scene when Quaid escapes on the subway and Richter just yells looking utterly furious. His final showdown with Quaid is one for the ages climaxing with his epic death where we get the fan favourite line “See you at the party, Richter!”

So let’s take a look at the 4K release special features:

The commentary with Arnold and Verhoeven is fascinating giving us some insight into how the film came together with Schwarzenegger telling us how he got Carolco to to buy the film so he could star in it. Both talk fondly about working with the studio and it seems like they let the filmmakers work without interference which is rare.

The documentary Total Excess: How Carolco Changed Hollywood is an hour long telling us about the rise and fall of Carolco featuring interviews with Michael Douglas, Mark Goldbatt and our very own david. j. moore. It goes over the Carolco library of films starting with First Blood and how it paved the way for them to become one of the biggest companies in Hollywood… until they weren’t.

As I mentioned above the Open Your Mind documentary is 21 minutes long and talks about the music score from Jerry Goldsmith and anyone who knows me understands my love of film music.

Dreamers within the Dream discusses the artwork for the film showing us designs for the vehicles and sets in order to bring this world to life while looking like it could really exist.

The Blu-ray has a making of featurette as well as a look at the special effects so by the time you’ve watched all of that you should be an expert on the film.

Overall, Total Recall is an action classic and it has never looked or sounded better than on this 4K release; it’s packed with special features that should keep you entertained for hours and after you’ve finished with them you can just watch the movie again which remains one of Arnold’s finest hours. We hope you enjoyed the ride!