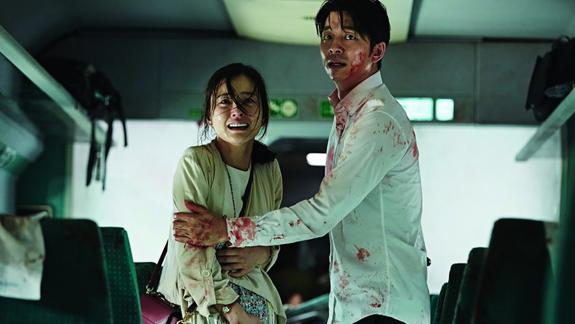 Train to Busan has plenty of zombie killing action, characters you actually care about and keeps the tension going for the majority of the runtime; this is one train you want to catch.

Plot: TRAIN TO BUSAN follows a group of terrified passengers fighting their way through a countrywide viral outbreak while trapped on a suspicion-filled, blood-drenched bullet train ride to Busan, a southern resort city that has managed to hold off the zombie hordes- or so everyone hopes.

Review: The zombie genre has (literally) been done to death and just when we thought we’d reached over-saturation with them Train to Busan comes along and reignites your interest.

This is a movie that has been getting rave reviews from nearly everyone and I’d have to agree that this is one of the best zombie movies of recent times. It’s far better than The Walking Dead which I long-since lost interest in but it also has a surprising amount of heart. I genuinely cared for our main characters and there were moments of genuine emotion, which is something you rarely see in the genre.

Thankfully, it doesn’t go for cheap jump scares but instead it ratchets up the tension and then once the train starts moving the chaos begins and doesn’t let up until the end. What ensues is an intense nightmare where nobody is safe and anyone can die at any time. Yes, there is some CGI but it’s better than you’d expect and I loved the visual of the zombies climbing over each other which just created this sense of desperation. These aren’t your slow moving Romero zombies but more like the rabid beasts from 28 Days Later that run after you, which is far scarier.

The movie actually isn’t all that gory without a single intestine in sight but there is still plenty of blood and it didn’t take away from the film’s intensity.

I thought the lead character of Seok Woo (Yoo Gong) was pleasingly different from your average protagonist; he isn’t an ass-kicking hero but starts off as a bit of selfish asshole only out to save himself and his daughter. As the story progresses of course he develops and starts to save other people. Some of the other characters are more one-dimensional especially the suit wearing prick Yong-Suk (Eui-sung Kim) who is unlikable from the start and survives for far too long.

Soo-an Kim plays the originally named Soo-an (Seok Woo’s little girl) and she gives an exceptional performance rather than being annoying like children usually are.

As always the zombies aren’t the only problem our survivors have to face as suspicion and paranoia grows between the commuters about who is infected. This only adds to the tension and is probably what would happen if something like this should ever happen. I also liked how nobody had any guns; everyday items like baseball bats would be used and not once did our heroes get any real weapons, which upped the threat level.

I did find it went on a little too long though and could have maybe cut a few minutes here and there but in general I thought it was a first rate zombie action/horror hybrid with a moving finale that is open for a potential sequel, but hopefully they leave it as a one off.

Overall, Train to Busan has plenty of zombie killing action, characters you actually care about and keeps the tension going for the majority of the runtime; this is one train you want to catch.