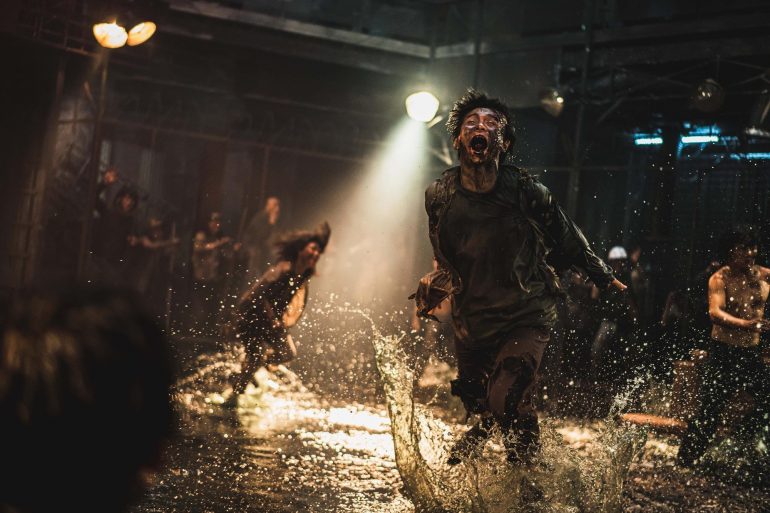 Train to Busan Presents: Peninsula may not reach the heights of the first movie was but it’s still a wild ride with some innovative set-pieces and plenty of action.

Plot: A soldier and his team battle hordes of post-apocalyptic zombies in the wastelands of the Korean Peninsula.

Review: Train to Busan became a bit of a modern zombie classic when it came out in 2016 so it’s no surprise that we got this follow up entitled Peninsula which takes place in the same world as Train to Busan (obviously) but ramps it up a notch by taking the action to well… a peninsula after a virus creates a plague of zombies on the Earth.

Our protagonist in this entry is Jung Suk (Dong-Won Gang) who is trying to escape the zombie outbreak but things don’t go as planned and after a few years in Hong Kong he ends up agreeing to go onto the peninsula and retrieve a truck full of money with a small group of others.

First of all I’ll just say this now that this is nowhere near as good as Train to Busan; it is certainly bigger in scale and more ambitious but there is an overuse of CGI in some action scenes and it just seems to go on for a little too long. That’s not to say it’s bad; I’ve read several negative reviews which I do totally understand but there’s enough crazy zombie action to make this thoroughly entertaining. Like Train to Busan it never goes overboard with any gore scenes and the humans are arguably a bigger threat than the zombies themselves. There is a lot of heart and I found I really cared for our group of heroes… even the children which is normally the death knell for any movie.

Jung Suk makes for a sympathetic hero and he is tested in every way possible as he is filled with guilt for past events which I won’t spoil here.

There is no shortage of action in Peninsula with some impressive set-pieces but the highlight is arguably the climactic car chase through the city at night with threats coming from every direction. It’s essentially The Walking Dead meets Mad Max with some really innovative and creepy ways for the zombies to move too.

There is an ex-military group on the peninsula who have all lost their minds watching humans battle the zombies in arenas with the sadistic Sergeant proving a worthy villain for the tale.

There is strangely quite a bit of humour which may seem odd which does take away some of the tension but it’s still for the most part an intense ride into Hell.

Overall, Peninsula may not live up to Train to Busan but it is packed with action and Dong-Won Gang makes for a relatable protagonist we can all root for.