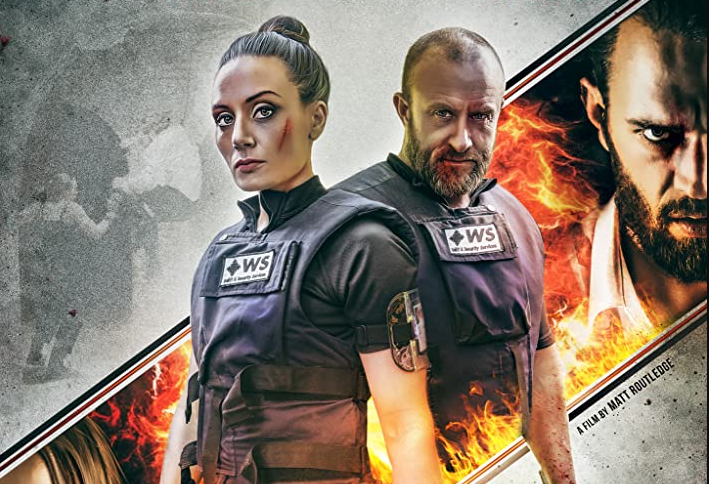 Tribal: Get Out Alive is a hugely entertaining British action/horror hybrid with a kick-ass lead in Zara Phythian and an abundance of beatdowns and bloodshed so definitely check it out when it is released in your area.

Plot: Elite military personnel Caitlin Ross retires from service after suffering from PTSD. Along with former team member and close friend Brad Johnson, they opted for the ‘easy life’ and now lead a small security firm. The company are hired by young, troublesome millionaire Richard Kenning to clear and secure the land and property he has recently inherited. Rumours and stories surrounding the land and buildings are dismissed until people start disappearing and the team end up locked in with no escape. It soon becomes apparent they are being hunted and the race is on to get out alive.

Review: I love it when a movie comes out of nowhere and proves to be one of the better action pictures of the year; considering the world has been shut down we’ve had a decent selection of action movies to choose from recently and Tribal: Get Out Alive should be next on your watch list.

Zara Phythian has been in a good few movies over the past couple of years but it’s Tribal that will put her on the map as the next female action star. Her character Caitlin manages to be totally badass but sympathetic at the same time; her partnership with Brad (Ross O’Hennessy) is filled with witty banter and he is also every bit as tough. They make for a great team and watching them take on hordes of zombie-like bad guys is a blast. Caitlin is essentially a female Rambo at one point preparing for war and Brad even mentions drawing First Blood as a nice nod.

Thomas Dodd makes for a wonderfully slimy and hateful villain as the daddy’s boy Richard who has inherited his father’s old farm which ends up not being quite what he expected with some dark secrets.

Tribal is only 85 minutes long so it moves a rapid pace and wastes no time getting going with regular action scenes including fights and gruesome kills so fans of horror/action hybrids should eat this up.

It’s very much open for a sequel which I hope happens as I want to see the further adventures of Caitlin and Brad as they make for an awesome action duo.

In terms of flaws it is another zombie type movie so it isn’t anything all that new and it’s all very silly but when it’s as entertaining as Tribal then who cares?

Overall, Tribal: Get Out Alive is a hugely entertaining action horror movie with Zara Phythian proving herself a new badass on the block, no shortage of brutal fight scenes and a tight pace making this a must-see for genre fans.