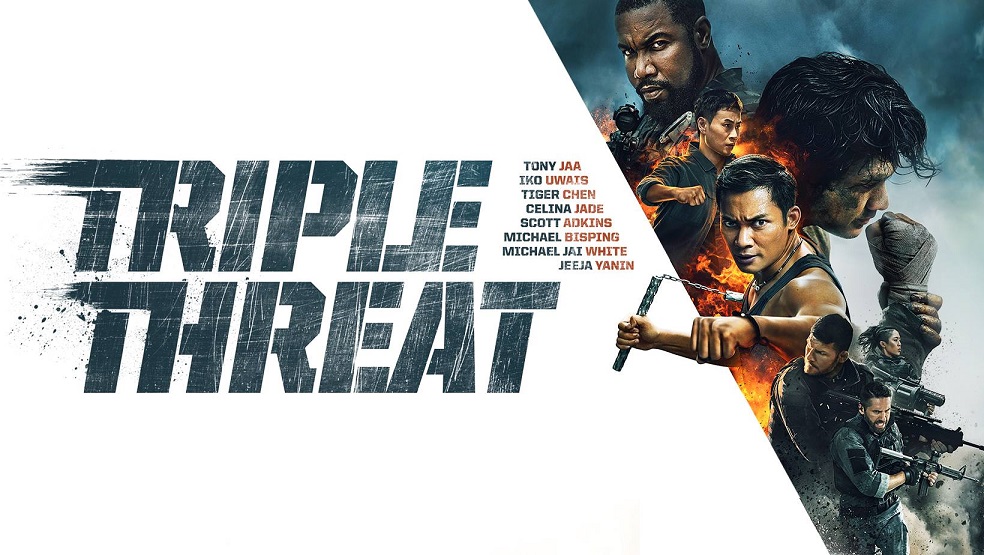 Triple Threat is the most badass action movie of the year with a cast at the top of their game and some amazing fight scenes. It really is an action fan’s fantasy come true so see it on as big a screen as possible and enjoy the ride.

Plot: A hit contract is taken out on a billionaires daughter intent on bringing down a major crime syndicate. A down and out team of mercenaries must take on a group of professional assassins and stop them before they kill their target.

Review: The action event of the year has finally arrived; Triple Threat has been on my radar for as long as I can remember with one of the best action casts assembled since The Expendables. In fact I’d go as far to say that Triple Threat is the best Expendables sequel we never saw and if this turns into a franchise then count me in.

Tony Jaa and Tiger Chen are the true blue heroes and what a great onscreen duo they make; it’s awesome to see Tony in a lead role again and he has really grown as an actor making him an immediately appealing protagonist. He brings his own personality to the role giving us some nice moments of gentle humour as well as showing he still has amazing martial arts skills. He trades buddy banter with Chen so the film feels like a throwback to classic actioners from the 80’s/90s. I mean this as the highest compliment but it’s almost like a cross between a Cannon or PM Entertainment movie with real action, stunts, cheesy dialogue and fight scenes galore.

Iko Uwais gets plenty of screen time too and at first we’re not quite sure if he’s good or bad as he seems to be playing both sides but it keeps you on your toes and he is another martial arts superstar I want to see more of.

Tim Man once again proves he’s one of the best in the business as he worked on the choreography so with every fight you see each punch and kick with smooth camera work and each fighter uses their own martial arts styles which makes each battle look far more cinematic.

All the fight scenes are thrilling and you get to see your favourite martial arts heroes battle it out in spectacular fashion. Triple Threat also finally brings back the epic bad guy death which has been sorely missing from cinema over the past few years. There is one particular moment which will have audiences howling with glee and as soon as you watch the movie you’ll know what I’m talking about.

The opening 10 minutes reminded me of Predator as the group of mercs search the jungle and attack a camp with Ron Smoorenberg dressed exactly like Shane Black when he played Hawkins. Smoorenberg is also one to watch as he has some serious martial arts skills so here’s hoping we see him in some big movies soon.

Triple Threat has the most squibs I’ve seen used in a recent movie so there’s no CG blood which makes every action scene so much better.

Director Jesse Johnson is no stranger to action having worked with Scott Adkins on Savage Dog, Debt Collector, Accident Man and the upcoming Avengement so I imagine by now they have a shorthand with each other which is why they work so well together. Each movie they work on is better than the last and Triple Threat may be their best yet.

Everyone gets their moment to shine with Scott once again proving he is an entertaining villain with exceptional fighting skills and it’s nice to see him using his (almost) real accent again too. Michael Jai White and Michael Bisping get plenty of action facing off against our heroes at various points but even when White is playing a bad guy I can’t help but like him as he has that larger than life presence on screen that dominates every moment. Jeeja Yanin is also on villain duties and she has a brief but impressive fight with Iko Uwais which will satisfy fans but I still would have enjoyed her in a larger role.

Celina Jade’s character is pure-hearted and is really just there to be rescued by our heroes but she does the best with what she is given and has good chemistry with Tiger Chen.

At 95 minutes long it wastes no time in getting going and rarely lets up the pace with fights and shoot-outs every few minutes. Story-wise there isn’t much to it and it’s essentially just a basic revenge tale but a movie like this doesn’t require any deep philosophy; it requires badass action performed by the coolest action stars in the business and on that front Triple Threat 100% delivers.

Overall, Triple Threat is a near perfect blend of fistfights and firepower making it easily the best action movie of the year so far; it has plenty of breakneck action, a cast that is clearly having a ball and one of the highest bodycounts in years. A must see!

Triple Threat will hit theatres for 1 night only on March 19th and on Digital and VOD March 22.