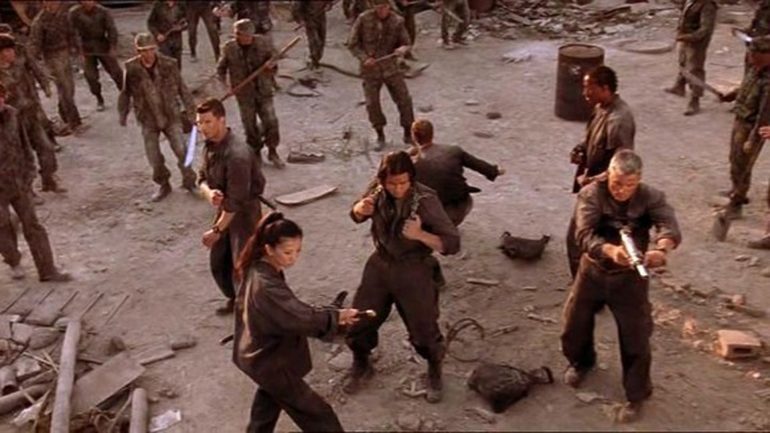 Has anyone actually seen the first US Seals movie? I haven’t however, this film is a sequel in name only and is directed by Isaac Florentine.

I bought this movie on VHS (yeah VHS!) a few weeks back and had been itching to check it out in all its grainy glory.

I can safely say it is more 80’s than all 80’s action movies combined and is just a blast from start to finish.

Packed to the brims with cheese, action and the best sound effects in the history of cinema US Seals 2 is devilishly entertaining.

Chapa plays Chief Frank Ratliff who goes rogue (and crazy), steals some nuclear weapons and holds the government to ransom; so far so generic, right? But what is a cool twist is that nobody is allowed any guns so they don’t set off the nukes. What ensues is lots of martial arts mayhem and frankly epic sword fights.

Did I mention how amazing the sound effects are? If someone even turns their head slightly you get an awesome “WHOOSH!” sound which I wish happened in real life. It caused me to laugh at several points and really just added to the sheer entertainment factor.

This would be the perfect double bill with Special Forces actually (which also starred Marshall Teague and was directed by Florentine) and for fans of Men on a Mission movies you’ll want to check this out.

What I wasn’t expecting was that US Seals would have the greatest bad guy death in the history of cinema; I didn’t think anything could top Universal Soldier and then… my God, it was beautiful. I’m not even going to say what happens, just watch the following clip and rejoice.

How about that? Wasn’t that awesome?

The fight scenes in this movie are actually superb and frankly better than pretty much anything I’ve seen in the cinema lately, so Florentine always had a knack for constructing great battles.

Some of the acting is ropey at times but the pacing is frenetic with minimal CG (except the explosion at the end) and it’s just so much fun that it’s really what The Expendables should have been. I liked how so many characters actually die to so there are genuine stakes which always bothered me about The Expendables movies.

To sum up, US Seals II is frankly everything you’d want from an action movie; awesome fight scenes, violent deaths, glorious sound design and the fact that guns weren’t allowed made the story and action all the more entertaining. Grab some beers and have fun!