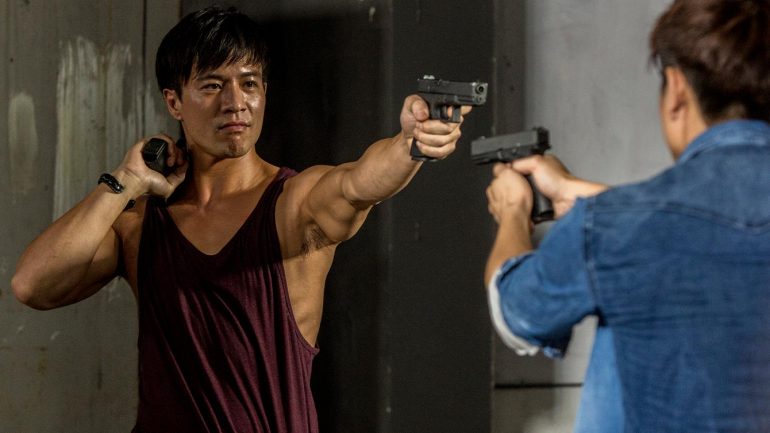 If you’re looking for 90 minutes of action then you could do worse than Undercover Punch and Gun; the fight scenes are impressive and you can’t go wrong with Philip Ng and Andy On in the same movie. It’s just too bad it was more of a silly comedy rather than a dramatic film as there were some interesting ideas they could have pursued.

Plot: While an elite cop is working undercover to infiltrate a notorious drug ring, his plan is blown when a rival agency with a grudge attacks during a trade, killing the gang’s leader. Their cover compromised, both teams are forced to unite in order to take to the high seas and attempt to overthrow the ruthless smuggler behind it all.

Review: Undercover Punch and Gun (awful title) is now on Hi-Yah! so I finally got to check it out last night. It looked awesome from the trailers but like so many movies today the trailers are better than the actual movies.

Anytime a film or television series is about an undercover cop you immediately expect that it’s going to be filled with tension as we worry if and when they will be found out. Undercover Punch and Gun never really does that as it goes more for farcical humour rather than drama.

Xiao Wu (Philip Ng) is our lead and he is said undercover cop; after the boss of the organization he is pretending to work for gets killed Wu is asked to take over. I thought the idea of an undercover cop becoming a crime kingpin was an interesting idea and there could have been some fun directions the story could have gone in but it sadly doesn’t do anything with the concept. After it’s announced Wu will be the new boss he is kidnapped by Xia Qiankun (Andy On) who is looking for the meth chef of the organization and wants Wu to bring him to him.

Xia was formerly a cop but ended up becoming a smuggler so he turned against his colleagues who are out for revenge against him. They want Wu to help them bring down Xia once and for all.

What we end up with is a fast-paced action film with regular impressive fight scenes and if you watch the end credits you see how hard Philip Ng works on his movies regularly getting injured but continuing on like a boss.

Vanness Wu plays the comic relief character Tiger who like most comic relief is mostly annoying rather than funny; he does have his moments though and he looks good in the fight scenes too, especially a climactic knife fight which is a highlight.

The story feels rushed and normally I love a 90-minute movie but I couldn’t help feeling there was a better film in there somewhere which spent more time with the characters.

There is some CG in the film (especially explosions) which is disappointing but for the most part there are some fantastic stunts and Philip Ng is one of my favourite actors in the genre today. He has real charisma and clearly has the talent in the action scenes. Andy On is also incredible to watch on screen and the final showdown doesn’t disappoint.

Overall, Undercover Punch and Gun makes for a fun and far lighter toned movie than I was expecting with a lot of goofy humour but there is enough action and fights to keep viewers engaged for the brisk runtime.