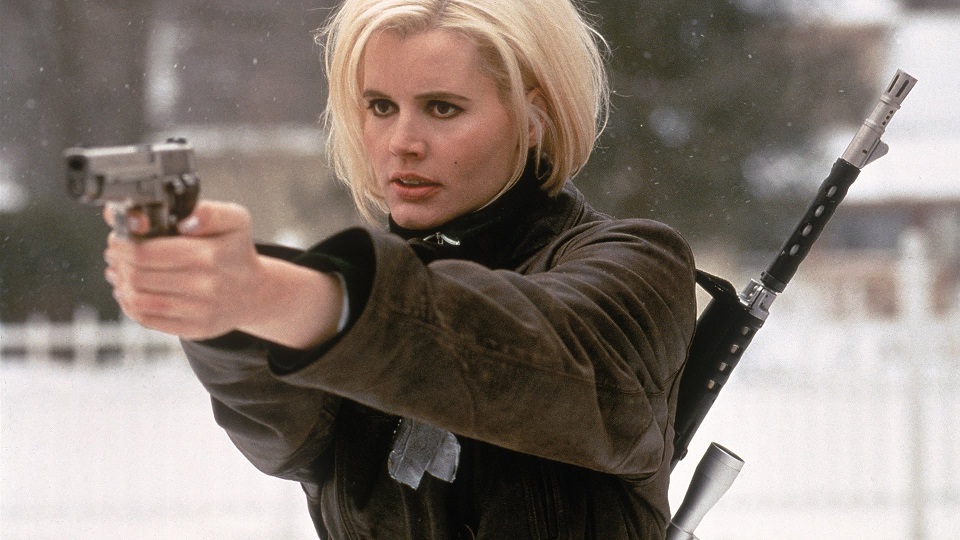 Plot: Schoolteacher and single mother Samantha Caine (Geena Davis) lives an average suburban life — until she begins having strange memories of unexplained violence and discovers that she has physical skills that she never imagined. Hiring private detective Mitch Hennessey (Samuel L. Jackson) to probe into her past, Samantha discovers that she’s a well-trained government assassin who went missing after suffering a bout of amnesia and that her former handlers want her back in their employ.

In keeping with the spirit of the season I thought I would pay tribute to a very silly but still massively entertaining action flick that takes place during the festive period – Renny Harlin’s The Long Kiss Goodnight. My fondest memory of this movie was the trailer which featured Enigma’s Eyes of Truth which is the epic choral music you’ll have heard in the trailer’s climax (I posted the trailer below if interested).

The Long Kiss Goodnight is essentially the same story as Bourne except with coherent (if hilariously over the top) action scenes and more memorable characters.

Shane Black is on scripting duties and the dialogue is Black at his best with witty one-liners and some pithy comebacks; Samuel L. Jackson is on particularly humorous form and his flirty banter with Samantha Caine (Geena Davis) provides plenty of laughs. I used to have such a thing for Geena Davis when I was younger and she is clearly enjoying every second in this movie going from “frumpy” housewife to a sexy and somewhat crazy assassin called Charly Baltimore who was also a fun and badass character. You do get the feeling that she’s trying too hard to sound cool and tough which doesn’t always work and sometimes causes unintentional mirth but it just adds to the enjoyment factor.

Craig Bierko is amazingly hateful as the villain Timothy who literally has zero redeeming features and is just a smug bastard right from the start. He has some great lines like when one of his goons is on the radio and he says “I think I’m dying!” to which Timothy responds “Continue dying…”. He’s a total cartoon villain which makes him all the more amusing to watch.

There is a fantastic supporting cast including the always great David Morse, Rex Linn and Brian Cox who deserved bigger roles than they had.

One story element I had forgotten about as it had been a few years since I watched this movie has the villains discussing how the World Trade Centre bombing in 1993 was orchestrated by the CIA to gain more funding and now they are planning on detonating huge bomb near Niagara Falls and “blaming the Muslims” for it. This was before 9/11 so at the time you’d maybe think it was outlandish but now there isn’t anything unbelievable about that plot-line.

It moves along at a fast pace with plenty of action and although some moments stretch credibility (like falling out of the window shooting the ice below and not dying) it’s a blast that will keep you on the edge of your seat throughout.

As this is a Shane Black script then it is of course set at Christmas so there are festive songs, Christmas lights hung on trees, and even a little Let it Snow which was a nice nod to Die Hard. It also has one of my favourite killer one-liners when Charlie promises Timothy that she will watch him die screaming so at the end she states “die screaming, motherf*cker!” which he very much does.

Alan Silvestri’s score is a little bland and forgettable lacking the memorable themes he normally comes up with but it’s adequate in propelling the story and action along.

This movie was also filmed right here in Toronto with Honest Ed’s showing up in the background which was a legendary store that closed last year; the setting was meant to be New Jersey but it was clearly Toronto.

I was looking at some of the trivia on IMDB and apparently Shane Black’s original script for this film was darker and more graphic than the final film. Amongst the many differences, it included some alternate action sequences, and more violence, like the scene where Mitch and Charly are captured and get tortured. Both characters also had bigger backstories in the original script, Mitch, at one point, tells Charly how he was gang raped in prison, and how his wife refuses to let him see his son, because of what happened to him, and Charly also had more of a dark backstory in the script, than in the film.

One of the movie’s original locations was a historic, grand hotel in Muskoka, Ontario, the one hundred-year-old Windermere House. During filming, however, the hotel caught fire and burned to the ground. The heat from the film lights were initially blamed for causing the blaze, but it was never proven that the lights started the fire.

During development, New Line Cinema considered turning the lead character into a male. Steven Seagal and Sylvester Stallone were considered as suitable choices, if the lead had gone that way.

I do wish we had gotten that sequel but sadly it never happened due to the disappointing box office so The Long Kiss Goodnight remains a standalone feature which is still an over the top action spectacular with a witty script, awesome female badass and scene stealing villain.