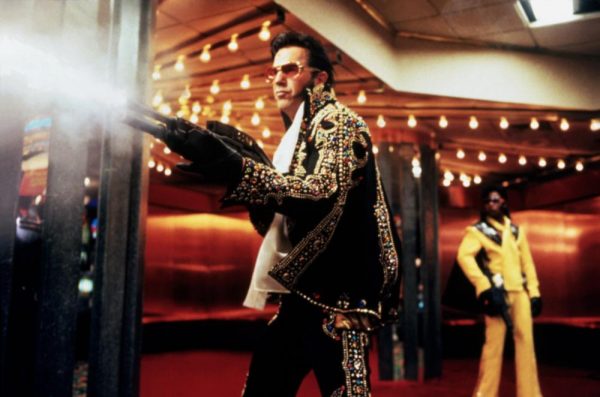 If you rely on scores from Rotten Tomatoes then you’ll be missing out on practically every action or horror movie ever made. 3000 Miles to Graceland is sitting at 14% Rotten on the site which shows that critics don’t know dick when it comes to action. Thankfully, I do and I can safely say that this movie is awesome. With a cast that includes Kurt Russell, Kevin Costner, Christian Slater, Courteney Cox, Kevin Pollack and Ice-T this is a movie you should definitely seek out.

It’s called a heist movie but really the robbery is over in the first 20 minutes and the real story is the fallout afterwards. I loved how the heist isn’t well planned but it’s just a clusterfuck which quickly turns into a bloodbath. Our perps are all dressed like Elvis and the heist takes place during Elvis week in Vegas so nobody should notice them in a crowd… except someone does and that’s when the shit hits the fan.

Kevin Costner has never been more psychotic as Murph, the ringleader of this crew who has no problem killing his own men or anyone who gets in his way. He’s unpredictable every moment he is on screen and could snap at any time. He pretty much has a cigarette in his mouth for entire runtime and is easily Costner’s coolest character to date.

Then you have Kurt Russell who plays Michael; Murph left him for dead after the robbery but he reluctantly teams up with single mother named Cybill (Courteney Cox) and her somewhat annoying son Jesse to get the money back from Murph. Cox has never been hotter than she is in this movie and the fact that she may or may not be a villain keeps things interesting.

There are various twists and turns and despite a rather predictable finale the action really is superbly executed with spectacular shoot-outs and plenty of hard R violence. The movie is not without a black sense of humour too with some choice one-liners and they mostly come from Costner’s Murph.

The score from George S. Clinton is all cool electric guitars and generally my favourite kind of action movie music; there are of course some Elvis songs and a few rock songs thrown in for good measure.

It is a little too long and like I said the kid is annoying at times but aside from that 3000 Miles to Graceland is a must-see.